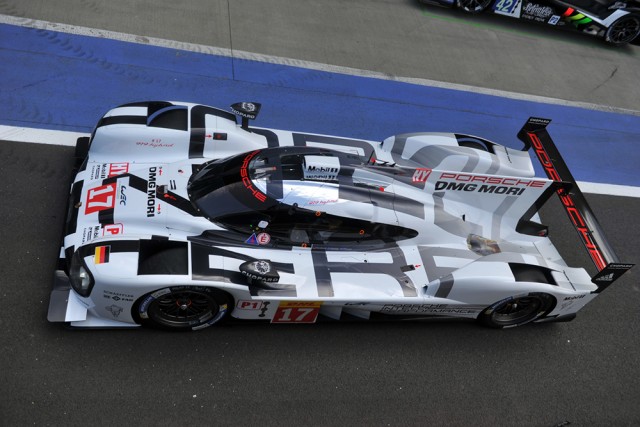 The #17 Porsche of Mark Webber, Brendon Hartley and Timo Bernhard will start from pole position at Silverstone Pic by PSP Images

Unable to match the pace of Audi in practice, Porsche saved their best until the 20 minute qualifying session with Webber and team-mate Brendon Hartley combining to set a session best two lap average of 1.39.721s.

The time proved to be more than six tenths of a second quicker than the #18 sister 919 entry of Romain Dumas, Neel Jani and Marc Lieb.

The #7 Audi will start from fifth ahead of the second Toyota in sixth.

The KCMG Oreca Nissan in the hands of Richard Bradley, Matt Howson and Nick Tandy was third more than a second adrift of the leading G-Drive operation.

Following his late call up to the event, David Brabham will start from 15th on the grid in the #31 Extreme Speed Motorsports entry, he will share with American duo Ed Brown and Jonathon Fogarty.

Aston Martin emerged as the pace setters with the British marque claiming pole positions in both the GTE Pro and Amateur categories.

The Vantage of Pedro Lamy and Paul Dalla Lana claimed the honours in GTE Am.