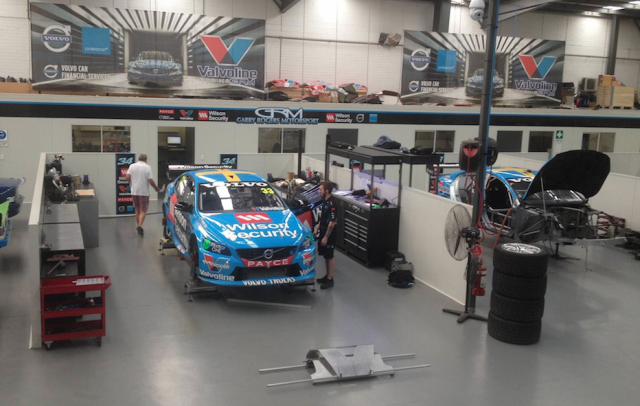 Garry Rogers Motorsport will roll out a freshly built third Volvo V8 Supercar for a shakedown at Winton Motor Raceway on Monday.

The new chassis, pictured above, will be driven by Scott McLaughlin for the 60km distance permitted under the shakedown rules.

GRM’s two current race cars were built new for last season, when the team switched from Holden to Volvo.

Team owner Garry Rogers says that the new car is yet to be allocated to either McLaughlin or team-mate David Wall.

“At this stage we’re just giving it a shakedown and then we’ll work out a plan from there,” Rogers told Speedcafe.com, adding that the new car is not expected to race at Barbagallo next month.

“We’ve been building it for about six months when we’ve had time on our hands between various race meetings, initially just to have a spare shell.

“We’d put it together with the plan that we’d race it at some stage, but there’s no set definition on when. It depends on what the future holds.”

The team will also be running its James Golding driven Dunlop Series Holden at Winton on Monday after a crash at Adelaide’s season opener required an extensive rebuild.

GRM has meanwhile been working closely with Swedish-based engine partner Polestar on reliability since Symmons Plains, where it suffered its third failure of the season.

While the Winton shakedown provides a rare opportunity for extra track time, Rogers downplayed the possibility of it helping the engine program.

“We’re still working through what our issues are there,” he said of the engines.

“The engine that we’ll run in the car on Monday will be the one that finished Symmons Plains.

“At this stage I don’t expect to gain anything from the shakedown on that front.”

Polestar is known to have pushed for improved fuel economy this season after proving deficient in that area during an otherwise outstanding 2014.

The Gothenburg-based company has been in charge of development and major rebuilds for the engines since the program started, with only limited maintenance undertaken at GRM.

Although shying away from details, Rogers confirmed that the same issue has been apparent in all three failures – one in Adelaide and two at Symmons Plains – to date.

In addition to the reliability problems, the team uncharacteristically struggled for pace last time out at Symmons Plains.

McLaughlin took a best of seventh from the three races, having qualified outside the top 10 on two occasions.

“I don’t think we should read too much into that, it was more that we just didn’t get the complete package right at Symmons,” said Rogers.

“I think the fact that we were able to qualify right at the front in Adelaide shows we still have the speed.”

McLaughlin and Wall sit 13th and 22nd in the championship respectively after six races.

Wall has utilised the month break between Symmons Plains and Barbagallo to undergo a skin graft on the toe that suffered a third degree burn in Adelaide.

The 32-year-old is expected to recover sufficiently in order to take the wheel for the May 1-3 Perth Super Sprint meeting.