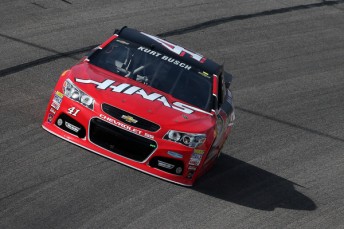 Kurt Busch has scored his second pole of the season and first at Texas Motor Speedway ahead of the Duck Commander 500.

Despite missing the opening races of the season through suspension, Busch has joined his Stewart-Haas teammate Kevin Harvick in being one of the form drivers in the NASCAR Sprint Cup. Further underlining the performance from the duo is that Harvick will share the front row with Kurt Busch for night race.

“It was so tight in qualifying,” Busch said.

“I wanted to try and run the same time each time out but with the track continuing to change with the sun and the shade and then the rubber build up, air pressures were changing, tyres were dropping off.

Chevrolet cars dominated the top-12 in the final knockout segment of qualifying with three Hendrick Motorsports entries, three Stewart-Haas Racing cars and both Chip Ganassi Racing drivers all in the run-off for pole.

Jeb Burton and Brendan Gaughan failed to qualify for the race.