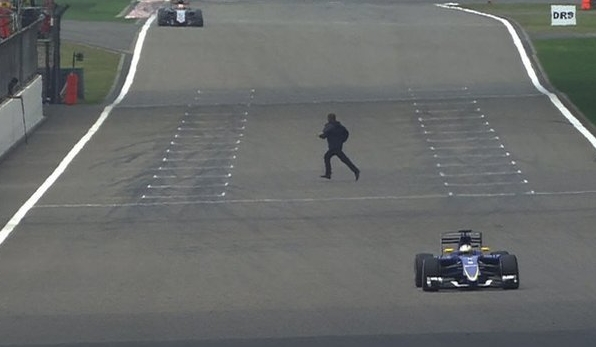 A spectator entered the track during second practice. pic via BBC

Lewis Hamilton beat Kimi Raikkonen to the fastest time in practice for the third Formula 1 race of the season in Shanghai, China.

The Mercedes driver’s best of 1:37.22s proved 0.44s quicker than that of his Ferrari rival.

The German, who had been second to team-mate Hamilton in the opening session, made a mistake on his soft tyre lap in Practice 2.

Daniil Kvyat was sixth fastest despite bowing out early when a brake problem caused him to crash at the Turn 14 hairpin.

Felipe Massa, 17th fastest, also had a wild spin at the end of the back straight during the second session, collecting the wall in the process.

His team-mate Valtteri Bottas flew the flag for Williams in seventh ahead of Felipe Nasr (Sauber), Romain Grosjean (Lotus) and Jenson Button (McLaren).

The day’s most bizarre moment occurred when a spectator crossed the circuit on the front straight.

The man jumped the pit wall after running across the circuit, where he was apprehended by marshalls while trying to gain access to the Mercedes garage.

He has subsequently been taken into custody by local police.