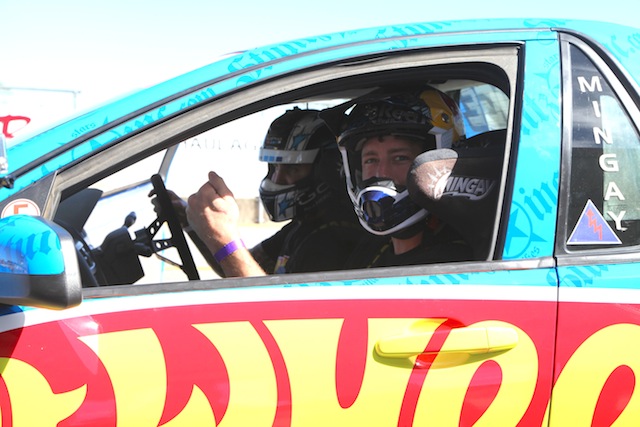 Global action sports superstar Travis Pastrana has not ruled out the possibility of giving NASCAR another shot once his freestyle riding career reaches its use-by date.

Pastrana is currently in the middle of his smash hit seven-show Nitro Circus show tour which runs its next leg at the Gold Coast’s Cbus Stadium on Saturday afternoon.

Invited by Australia’s leading action sports performer Matt Mingay to drive his stunt Ute and Trophy Truck at Queensland Raceway on a spare day for the Nitro star, Pastrana told Speedcafe.com that he still harbours a desire of doing ‘bucket list’ NASCAR events headed by the signature Daytona 500.

The 31-year-old dabbled in NASCAR earlier this decade which culminated in a full Nationwide drive in the #60 Roush Fenway Ford in 2013 when he scored four top 10 finishes and a pole at Talladega.

The Maryland, USA, native admits that he enjoyed his time in stock cars but found the challenge of communicating to the team of what the car needed was challenging.

“I didn’t understand a lot about NASCAR but the cars are such piles of crap,” Pastrana told Speedcafe.com.

“They have so much power and they are really the hardest things I’ve ever had to drive.

“For me it was more the communication from myself to the team. I needed to learn a lot about the cars.

“And that’s where I felt like I needed a lot more practice.”

Having turned his back on NASCAR later in 2013 after his wife Lyn-Z had the couple’s first child, Pastrana says the lure of a top level Sprint Cup drive remains.

“I would love to jump back in a car,” Pastrana said.

“There are some events I didn’t get the chance to do. I would love to do the Daytona 500.

“But at the end of the day to be better than where I was, that would basically mean not being a father or a husband.

“And I like to be able to spend time with my family.”

Pastrana says that once his commitment to the Nitro Circus is not as demanding he sees cameo roles in NASCAR as a ‘bucket list’ attraction.

“It’s just coming up with the sponsorship,” he continued.

“I’m not sure if we can really qualify because there’s only few spots up for grabs especially for that (Daytona) race.

“Everyone is trying to qualify for it. So you have to convince a sponsor.

“For me I’m not in a position in my life where I can build a package to take a car and try to qualify for selected events because I’m so committed to Nitro.

“But in the future there is definitely a lot of stuff on my bucket list. My bucket list will never run out.”

Pastrana treads carefully when asked if Australia’s V8 Supercars has ever been on his radar.

“Would absolutely love to, yeah,” he said.

“But the difficult part is to jump into any series that is tough without any grounding.

“Basically it is what I’ve made a career on is jumping in and seeing if you float.

“But having said that you want to be at least not in the way.

“So for that it would probably take a year of coming through and that’s not saying to be the best.

“That is just to be in there and not crash the cars and present yourself in at least a way that you are proud of.”