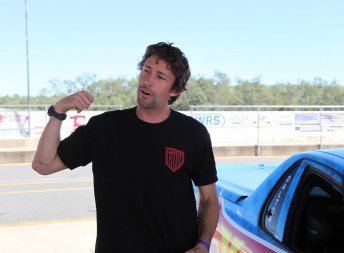 American action sports giant Travis Pastrana says the balancing act with his dare-devil show has become more real now that he is the father of two baby daughters.

Pastrana is the global ringleader of the smash hit Nitro Circus that involves more than 40 performers on freestyle motocross bikes and other disciplines which also features his champion skateboarding wife Lyn-Z.

The show moves to Robina’s Cbus Super Stadium on Saturday afternoon for the next regional leg of the Nitro Circus Australian tour.

The 31-year-old Pastrana says now the couple has two kids it means only one of them can be injured at the same time.

Speedcafe.com editor in chief Gordon Lomas caught up with Pastrana at Queensland Raceway while he and members of his crew including Streetbike Tommy (Tommy Passemante) and Crum (Aaron Sauvage) had a play around with Matt Mingay’s stunt Utes and Trophy truck.

SPEEDCAFE: How many times is this touring Australia now for you?

TRAVIS PASTRANA: Oh let’s see, 10, 15 maybe. I’d only been to Australia once before the Nitro Circus started.

I heard about this guy Chad Reed. He was 18 and I was 17 and we got to race in Sydney which was really cool.

But since then I started coming over for Nitro Circus and we are over here probably twice a year.

SPEEDCAFE: So you are in the middle of what you call your regional Nitro tour which moves to the Gold Coast’s C-Bus stadium on Saturday.

PASTRANA: I’m really excited about that. This in my opinion is our best tour, the regional Australia tour, because we only have one event (chuckles) … we still call it an event because are still competitive but its a show really I guess for a week.

And my family just hang out on the Gold Coast and we’ve just been practicing and just riding and doing fun stuff, filming impromptu stuff like playing with Matt Mingay’s Utes and Trophy Truck. 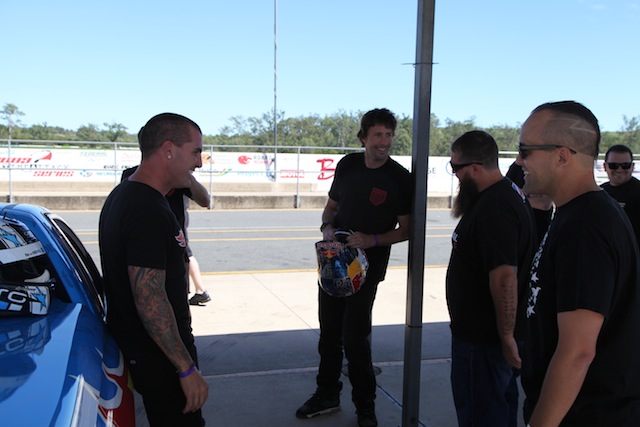 SPEEDCAFE: So it must be challenging from a point of view of inventing new stuff, themes or tricks with the Nitro Circus?

PASTRANA: As far as tricks, the guys are always pushing themselves. They are always stepping things up from one show to the next. It’s always different.

If as a spectator you haven’t been for a year, a lot of it completely changes. Also a lot of it depends on the injuries.

A lot of the ramps and stuff that I’m pushing to get in, we’ve had limited success in that we crash a lot and we break stuff.

The hardest part is figuring out that balance between aggression without killing us all off and having nobody do the show.

SPEEDCAFE: I guess that is the nature of the beast. It must be a constant challenge to manage injuries and not have too many people sidelined at the one time?

PASTRANA: Without a doubt. These guys are good at falling and at what they do.

It’s that balance of if you are at your home town show and the crowd is really into it one night, crap gets thrown and people crash.

SPEEDCAFE: How many people perform in any one Nitro Circus show?

PASTRANA: We start each show with about 40 and we will rotate through as needed.

A lot of the guys in the show are the world’s best so a lot of them will come for maybe five or 10 shows and then they’ve got to go back and keep practising or do their competitions. 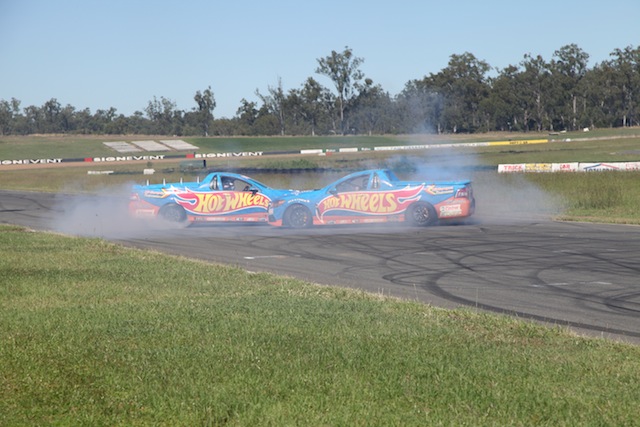 SPEEDCAFE: When you did NASCAR Trucks and Nationwide in 2012-2013, you obviously gave it a good crack, was that a good thing to reflect back on?

PASTRANA: It was awesome, man. I didn’t understand a lot about NASCAR but the cars are such piles of crap.

They have so much power and they are really the hardest things I’ve ever had to drive. If you slide at all you are in trouble and you’ve got to be on the edge the whole time.

For me it (the difficulty) was more the communication from myself to the team. I needed to learn a lot about the cars.

You are talking two or three tenths of a second separates the entire field.

Basically you only have two corners, they call it four but I’m not surely how they work that out.

At the end of the day you’ve got to not only be really good but be really good at telling the guys what you need from the car. And that’s where I felt like I needed a lot more practice.

I had a lot of fun and got to learn a lot from the guys, but I just wasn’t getting the results I wanted without a full-time driver.

To be good at anything you’ve got to be willing to commit.

With my wife (Lyn-Z) not wanting to be a NASCAR wife and having a kid (their first child Addy Ruth born on September 2, 2013) I wanted to get back to what is my passion really. 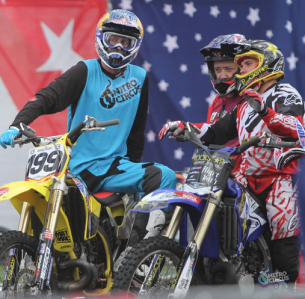 Pastrana and the lads during a Nitro Circus live show

SPEEDCAFE: Is that (NASCAR) a part of your life that has been and gone. Is there no going back or never-say-never?

There are some events I didn’t get the chance to do.
But at the end of the day to be better than where I was that would basically mean not being a father or a husband.

I like to be able to spend time with my family.

SPEEDCAFE: You’re fully au fait with our V8 Supercars. Is that something you’ve had a hankering for?

PASTRANA: I would absolutely love to. The difficult part is to jump into any series that is tough without any grounding.

Basically it is what I’ve made a career on is jumping in and seeing if you float. But having said that you want to be at least not in the way.

So for that it would probably take a year of coming through and that’s not saying to be the best.

That is just to be in there and not crash the cars and present yourself in at least a way that you are proud of.

SPEEDCAFE: With things like the desire to do the Daytona 500 have you spoken with anyone firmly about that?

PASTRANA: It’s about just coming up with the sponsorship.

I’m not sure if we can really qualify because there’s only few spots up for grabs especially for that (Daytona) race.

Everyone is trying to qualify for it. So you have to convince a sponsor.

For me I’m not in a position in my life where I can built a package to take a car and try to qualify for selected events because I’m so committed to Nitro.

But in the future there is definitely a lot of stuff on my bucket list. My bucket list will never run out.

The good part about freestyle is I only have a few more years left.

With cars, I’m sure you know of Stig Blomqvist (Sweden’s 1984 World Rally Champion), my first year in pro rallying 10 years ago he kicked my butt and never made a mistake.

I was getting literally crushed by a guy more than twice my age and that is what is awesome about cars because you can do it a little longer.

SPEEDCAFE: How is it balancing out the family life now with the show?

PASTRANA: Basically with one kid it wasn’t so bad but now with two and Lyn-Z is part of the show with the skateboarding, means that only one of us can be hurt at a time basically.

So my wife has had to kind of step back a little bit and be a mum which she loves.

Her whole identity is being an athlete and the best in the world so we both kind of push ourselves.

We want our kids to see that this is awesome.

But if our daughters don’t do any of this stuff I just want them to be able to see what the passion is all about in the Nitro Circus and hopefully they can take that to whatever they want to do.

SPEEDCAFE: What is next in your world? You’ve got the Nitro Circus which is massively successful, what is on the drawing board?

PASTRANA: For me what I’ve always loved to do is to progress, to build stuff.

I’ve always loved racing it was a lot of fun.

But now with injuries and time to be on top of racing, every second of every minute is about that and I’m past the point with family where I could really do that wholeheartedly.

But with freestyle you can really focus on an aspect or an avenue.

I really wanted to do the triple backflip and it took us about a year and a half.

So for me really it is about continuing to do action sports and have a place for these kids who are coming up to be able to make a living from.

I’m kind of taking a half step back but still having fun and pushing when I want to.