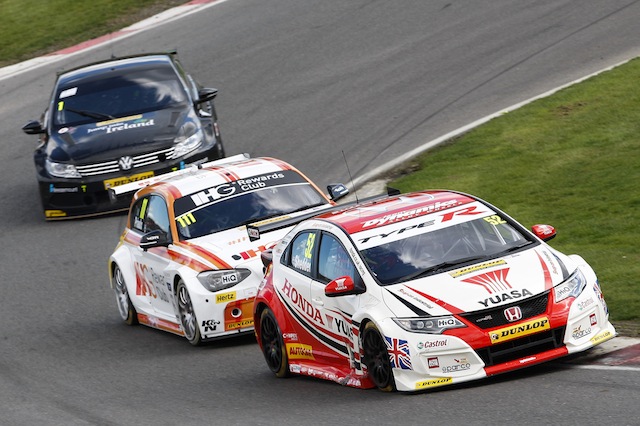 Collard was forced to muscle his way around the returning Andy Priaulx, who claimed pole position for Race 1, on his return to the series.

Once in front, Collard headed the Team BMR Volkswagen’s of Aron Smith and Jason Plato at the chequered flag, while Priaulx slipped back to ninth.

Plato dominated the second race as he led from the front until drama struck with just four laps from the end.

A front right puncture saw the double champion spear into the gravel trap at Paddock Hill Bend, which handed the lead to the Shedden’s Honda.

“I had a moment on the last lap with back markers which made it a photo finish, but you’ve only got to win by the tiniest of margins and they don’t come much smaller than that,” Shedden said.

Honda’s impressive showing continued in the final race of the weekend with the three-time champion winning a battle with Rob Austin to set up a 54th BTCC race win.

Neal shot by long time race leader Austin at Paddock Hill Bend but was then forced to fend off MG’s Jack Goff for several laps.

“Two wins for the new car at its first race weekend – the Type R is back. It’s just fantastic, a brilliant weekend for the whole team.”

The race three winner and Goff are tied for the championship lead on 37 points ahead of the second round at Donington Park on April 18-19.