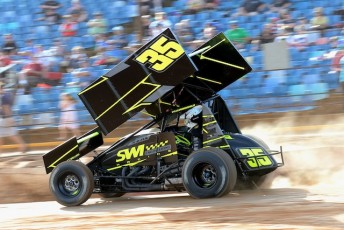 Drivers have plenty to lose if they put one wheel wrong in the Easter Trail Sprintcar series run across Avalon, Mount Gambier and Warrnambool this weekend.

The three-night series sees a kitty of $55,000 up for grabs with Avalon opening proceedings on Good Friday highlighted by a 30-lap main event.

“We have spent over 25 years refining the Easter Trail to the point where it is now the richest contest of its type in Australia,” Avalon spokesman Jeff Drew said.

South Australian Daniel Pestka and Warrnambool’s Jamie Veal are inseparable in the season-long Essendon Ford premiership that rewards the top driver with a new $20,000 motor vehicle.

“You have to make a commitment at the start of summer to be at Avalon for our major events and that is exactly what Pestka did,” Drew said.

“He has a narrow lead on Jamie Veal and their battle will go down to the final lap to resolve a $20,000 pay off on Friday night.

This year’s Easter Trail offers $10,000 for a clean sweep plus a new Harley Davidson which has been responsible for a healthy list.

Supporting the Good Friday grand final will be the annual Easter Demolition Derby and the K-Rock Fireworks spectacular.