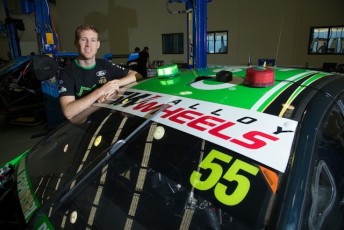 UPDATE: Speedcafe.com hopes you enjoyed our below story for April Fools day for 2015.

The V8 Boost system will allow fans to vote via social media for their favourite driver, with the most popular receiving an extra shot of 41bhp for a maximum of 60 seconds.

The system is similar to that run in the inaugural FIA Formula E Championship.

In a V8 Supercars twist, Australian fans will also be able to vote on which driver they want to see endure a similarly structured power reduction, known as V8 Reduce.

Viewers will be able to see when the boost is engaged with high intensity LED lights flashing green when the team chooses to benefit from the extra horsepower.

A red LED light will similarly be activated when the team chooses to take their horsepower penalty.

Team pit booms and engineering stations will also be connected to the lights system.

The V8 Supercars television coverage will carry live updates until voting closes and alerts when V8 Boost and V8 Reduce are engaged.

Although yet to be confirmed, the voting system and allocation of V8 Boost and Reduce is expected to be repeated every hour during the 161 lap race.

According to Bottle-O Racing driver, David Reynolds, the initiative is bound to cause controversy.

His Prodrive Racing Australia team has been proactive in developing the system since it was first mooted at February’s Sydney Test.

“For sure, it’s going to create some discussion,” Reynolds told Speedcafe.com.

“From a driver’s perspective you’d be foolish not to engage with the fans and get them voting.

“A few years ago at Bathurst, I could have done with that extra horsepower to get past Jamie and at PRA – we’ll do everything we can to make it three wins at the 1000 on the trot.”

The system, dubbed the AF-01-04, is expected to be track tested for the first time later this month.