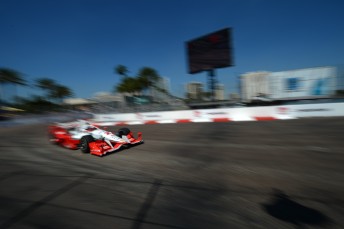 Team Penske IndyCar team-mates Juan Pablo Montoya and Will Power have clashed in the final stages of a tense Firestone Grand Prix of St. Petersburg in Florida.

Montoya took the lead of the race following a lap 83 pitstop by Power. Penske made a rare mistake, losing time when they were late in pulling the airjack from the defending Champion’s car.

With superior red tyres on board the Power machine, he was able to close the narrow gap. With 11 laps remaining in the 110 lap race, Power came from a long way back at turn 10, rode the ripple strip and collided with Montoya.

The pair were able to continue on – however Power had front wing damage and never got back on racing terms with the Colombian.

Montoya was adamant that Power was in the wrong.

Power was practical in his assessment of the incident.

“It (Turn 10) was the only place I could get a run on him, he was phenomenally fast,” said Power. “I think he saw me. The move was kind of optimistic, if he gave me some room I would have taken it.

“It was my only chance, I was counting on him being tight on fuel. This season is going to be a battle between team-mates for the Championship I’m sure!”

“In the end they have to go racing, Will wanted to get by, but Juan didn’t want to let him by, so we’ll move onto the next race,” said Penske.

After securing the top four places in qualifying, the four Penske cars ended up in the top five. The only non-Team Penske machine in that top five was Tony Kanaan who brought his new-look NTT Data Chip Ganassi Racing machine home in third.

This led to Graham Rahal colliding with Charlie Kimball on the restart, he – like de Silvestro – was handed a drive through penalty.

After getting by Castroneves, Power held the lead again until the decisive lap 83 service.

The big talking point from the race however was the number of cautions caused by debris from flailing winglets on the new-look IndyCars in 2015.

Three full course cautions were thrown for officials to clear the track of recalcitrant winglets. The slightest touch heading into turns would see the winglets detach. No doubt it will be a topic of discussion among teams and Verizon IndyCar Series officials for future events.

The engine and aero advantage lies with Chevrolet after St. Pete, the bowtie occupying the top six positions (Sebastian Bourdais was sixth).

It was Montoya’s second IndyCar victory since his return to the sport last year and his first street race victory since Vancouver in 1999, his Championship year.