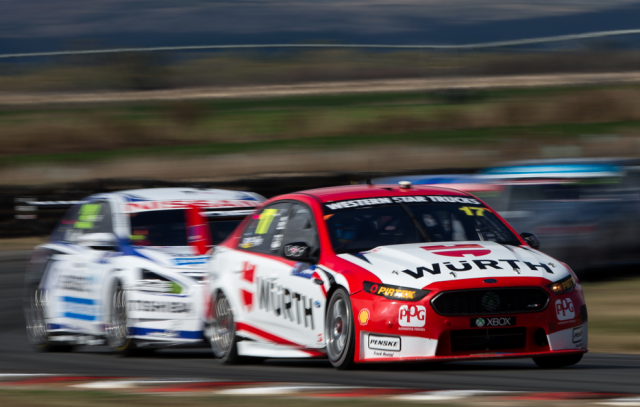 A tough slog for Scott Pye at Symmons Plains has confirmed to DJR Team Penske that its technical package was to blame for Marcos Ambrose’s poor form earlier this season.

Substitute driver Pye recorded a 17th and two 18th place finishes across the weekend’s races in place of Ambrose, who elected to stand down from driving ahead of the event.

Although yet to publicly confirm plans, the team is set to continue with Pye for the next race meeting at Barbagallo as it works through its issues.

According to Pye and the team, the 25-year-old South Australian reported the same basic shortcomings in the car as Ambrose had in Adelaide and Albert Park. 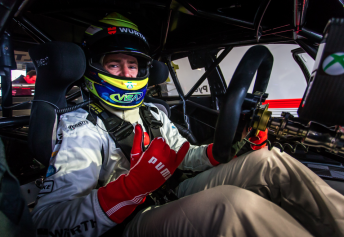 Scott Pye in the #17 Ford at Symmons Plains

Pye struggled to rotate the car through the circuit’s key corners on the hard tyre all weekend; a problem that greatly decreased tyre life.

The issue was, however, masked by the extra grip of the soft rubber used on Sunday, which notably saw the #17 Ford one of the fastest cars on track during the race’s third and final stint.

“The problems Marcos had on the hard tyre, the same trend was there for me,” Pye told Speedcafe.com.

“I think it really is because of the balance shift with the new aero on the car (FG to FG X) that we’ve just lost a lot of front (grip, compared to last year).

“Our pace on the soft tyre showed that when the car’s good we can do a good job but there’s still that problem on the hard that we can’t get on top of.

“The Prodrive guys have (gotten on top of it) but we’ve obviously got a completely different car to them.

“The good thing is we know exactly what the problem is and where it is in the corner, but finding the solution is the difficult part.”

Following the clarity provided by Pye’s feedback, DJRTP managing director Dr Ryan Story added that the team will analyse all areas where its package differs from that of Prodrive’s. 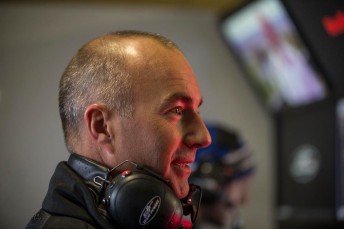 Marcos Ambrose was a keen observer in the DJRTP garage

While Prodrive qualified all four of its own cars in the top 10 on Sunday, its set-ups – which DJRTP has access to under a customer arrangement – are clearly not translating directly to the #17 Ford.

“We didn’t make any massive inroads by changing driver but it gave us some direction and it has clarified for all of us the areas that we need to focus on,” Story told Speedcafe.com.

“There are some obvious differences between the Prodrive cars and our cars in terms of engines and dampers, but we must now look at everything.

“We’ve got a hell of a lot of work to do and in a lot of respects it’s a good thing to have the break for us to regroup.”

Pye left Symmons Plains encouraged by the fact that he had helped the team make progress with their own set-up direction throughout the weekend.

“It was disappointing that we didn’t quite hit the nail on the head all weekend but I think the changes we made to the car on Sunday made it a lot more competitive,” he said.

“We went in the right direction but we need to be more aggressive with it again.”

Ambrose has meanwhile made it clear that he is in no hurry to return to the driver’s seat after making the “humbling” decision to step back in favour of Pye’s experience with the Car of the Future V8 Supercars.

CLICK HERE for Speedcafe.com’s full interview with Ambrose on his decision.

“It’s been great for me to watch from the sidelines and see how the weekend unfolded,” said Ambrose during the closing stages of Sunday’s race.

“I was lost with the car and clearly we’ve got some work to do on our race team.

“We’re going to really have to assess ourselves in this four week break coming up and make some good choices.”

Pye added that the self-critical Ambrose should be encouraged by what the team found at Symmons Plains.

“For Marcos I’m sure this weekend is a good thing because this is what we wanted to find out,” said Pye.

“He was brave in doing this but this is obviously what we were all hoping for, to just take out a variable.

“Prodrive have obviously clicked onto something with their cars and we (at DJR Team Penske) need to work better as a team of engineers and drivers and try to tune our car up.”