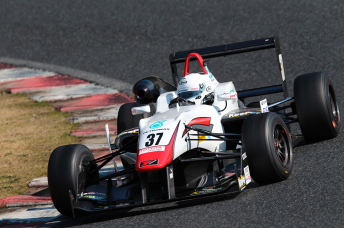 Kiwi driver Nick Cassidy has touched off preparations for his debut in the Japanese F3 Championship following the final round of testing.

Driving for the TOM’s Toyota team, Cassidy had a positive two-day test at the 3.7km Okayama circuit.

Cassidy was third fastest on the opening day before finishing second and fifth on the timesheets in the two sessions on the final day which saw a new compound tyre introduced.

Team-mate Kenta Yamashita topped the charts in the final two sessions, .3s quicker than Cassidy’s best in the morning run.

“Overall, a positive end to testing for us,” the 20-year-old Cassidy said.

“It was great for me to be able to try many things on the car, running through a lot of changes and tyres.

“There was an introduction of a new tyre compound at this test, which was interesting.

“The front guys are getting closer all the time, and some of these guys out here are very quick, but I’m up for the challenge.”

The Japanese F3 Championship is scheduled to start on April 18 at Suzuka.