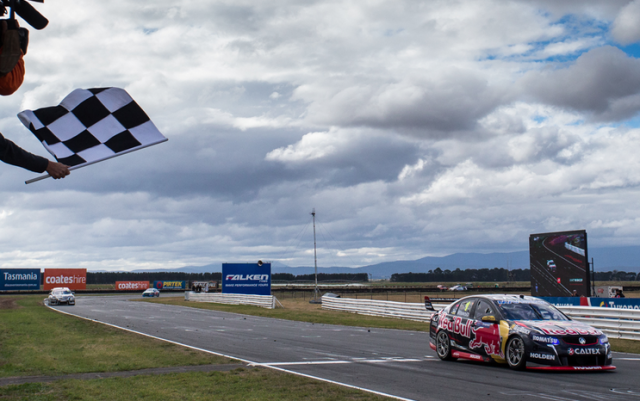 Whincup made the most of early trouble for team-mate Craig Lowndes to record a commanding win, moving to the top of the championship in the process.

Eventual sixth place finisher Lowndes had received a drive-through penalty after a tangle with Reynolds at Turn 2 on the opening lap.

The Bottle-O Ford pulled ahead off the start before being tagged into a spin by the Red Bull Holden.

“It’s amazing how it turns around,” said Whincup post-race.

“The weekend was dominated by Lowndesy… I can’t believe I’m on the top step of the podium.

“The cars are quick and it’s really nice going into a five-week break with a win behind us.”

Van Gisbergen went on to finish third behind Whincup and Chaz Mostert, who had used strong strategy and soft tyre life to move up from sixth on the grid.

The top four finishes ran with the bulk of the field in choosing to start and finish on their single set of soft tyres.

Fifth placed Mark Winterbottom was the first of those to run the alternate strategy; starting on hards before double-stinting his softs to the end.

The strategies played out without the interruption of a single Safety Car throughout the 84 laps.

David Wall and Tim Slade were the only two retirements, with the former out early thanks to an engine failure.

Slade meanwhile appeared set for a 10th place finish when forced to pit for fuel in the dying stages.

Whincup then took the flag before Slade reached the pit exit, ensuring the Supercheap Holden was scored as a DNF.

The V8 Supercars Championship now takes a month break before heading to Barbagallo in Western Australia on May 1-3.