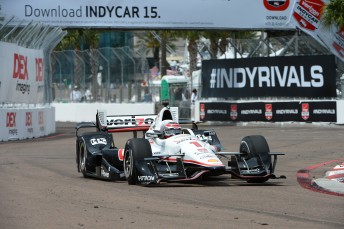 Will Power led a dominant display from Team Penske in St. Petersburg qualifying

Defending Verizon IndyCar Series Champion, Will Power has led all four Penske cars in the Firestone Fast Six qualifying at the Grand Prix of St. Petersburg.

The Toowoomba ace and team-mate Simon Pagenaud traded the top spot for most of the final shootout session before Power was able to annex his 1:00.9631 time as the chequers flew.

It is Power’s fifth pole position on the streets of St. Pete and his first since 2013 – after establishing the pole time there between 2010 and 2013 inclusively. Such was his dominance in the qualifying session, he topped all three stages.

Early in the race for the Verizon P1 Award, Takuma Sato looked as though he could upset the Penske applecart, however he will now start fifth in front of Sebastien Bourdais who also scraped into the Fast Six.

Power admitted that he was lucky to set the lap time.

“We probably got one lap less than we anticipated, we tried to time it so I was the last car over the line but I’m absolutely stoked to come away with pole position here,” the Queenslander said.

“The fact that all four Penske cars are leading the way shows all the hard work that we’ve done over the winter.

“In the race though, everything has to fall your way, so we’ll see how we go tomorrow.”

Tony Kanaan was the first outside the Fast Six with Ryan Hunter-Reay, Scott Dixon and Josef Newgarden rounding out the 10 for the season opener.

Andretti Autosport’s Simona di Silvestro – the only female in the field – qualified an impressive 11th, whilst former GP2 front runner, Stefano Coletti was the first Rookie in 17th.

The first race with the much talked about new INDYCAR aero kit has seen the field tightly bunched.

The times established throughout the three stanzas of qualifying sees the majority of the field covered by around one second, which sets up a tantalising opening race tomorrow.