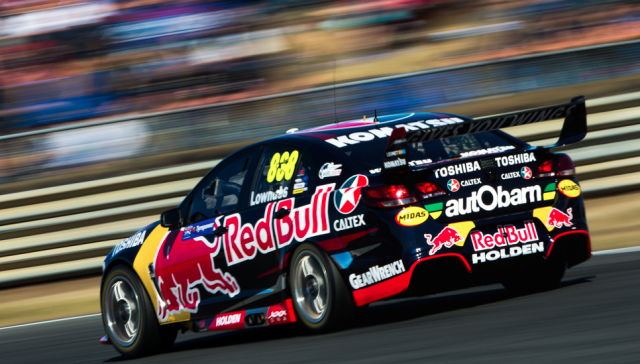 Craig Lowndes scored a 40th career pole ahead of Race 6

Craig Lowndes has scored his third Armor All Pole Award of the weekend at Symmons Plains ahead of this afternoon’s 200km finale.

The 40-year-old now has 40 career poles and is hunting a 100th race win in the championship.

Lowndes sat atop the order with a 52.03s best ahead of the crucial final tyre run of the 20 minute session.

The Red Bull driver then improved the benchmark further to 57.80s to end up 0.04s clear of David Reynolds’ Prodrive Ford.

“I actually didn’t think I got the best out of the car today in qualifying, but it was good enough to be up there,” smiled Lowndes.

“The guys are all delighted and now we can concentrate on the 84 laps ahead.”

Andre Heimgartner backed up his impressive Saturday qualifying efforts with seventh ahead of Garth Tander, Mark Winterbottom and Jason Bright.

Scott McLaughlin and James Courtney both found themselves outside the top 10 in 11th and 12th respectively.

Race 6 of the championship is scheduled to get underway at 1400 local time.

While qualifying was held solely on hard tyres, each car will be allocated a set of softs to use during the race.