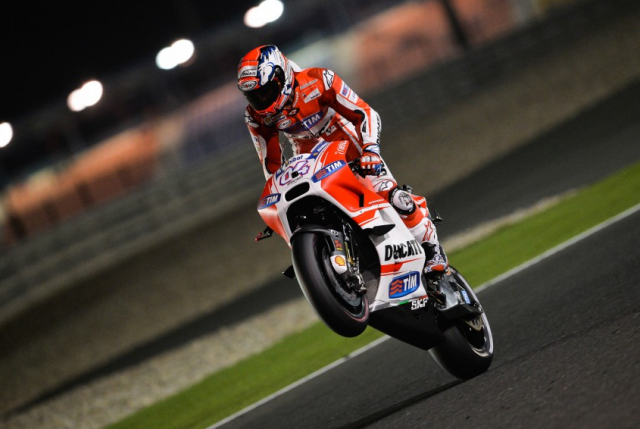 Andrea Dovizioso has claimed pole position for the opening MotoGP race of the season in Qatar.

The Italian will share the front row with factory Honda riders Dani Pedrosa and Marc Marquez after going to the top of the timesheets just before the chequered flag.

Dovizioso’s effort vindicates the potential of the Ducati Team’s new Desmosedici GP15 after the Italian marque dominated pre-season testing at the Losail Circuit a fortnight ago.

“We are a question mark because we have never raced with this new bike, but the feeling with the bike is much, much better than last year,” said Dovizioso.

“Our pace in Free Practice 4 was very fast – close to or the same as Marquez – and it will be difficult to fight with him tomorrow but our speed is there.

“I arrived to the qualifying session with a really good feeling, and with the soft tyre I made a really special lap.”

Pedrosa laid down the first competitive lap of the QP2 session with a 1:54.424 on his first flyer.

The Spaniard sliced another tenth off that lap next time around as Repsol Honda team-mate and compatriot Marquez went to second and Dovizioso third.

That was where the field stayed after the first run of laps, before Yonny Hernandez looked on for a shock front-row start with his final a 1:54.675 in the final minute

Marquez and Danilo Petrucci, who came through QP1, both threatened to knock Pedrosa off the top spot but couldn’t finish off their laps.

Dovizioso, however, could put four sectors together to take his third premier class pole.

Bradley Smith split the factory Yamahas after just making it through QP1, while Petrucci completes the third row after topping the earlier qualifying session.

Pol Espargaro was tenth, Aleix Espargaro eleventh on Suzuki’s full MotoGP return, and Cal Crutchlow rounded out the Q1 session after crashing with just over a minute remaining.

Jack Miller was the other rider to come to grief when he went down in QP1 and will start from 22nd on his MotoGP debut.

The race will commence on Monday morning at 5:00 AEDT.