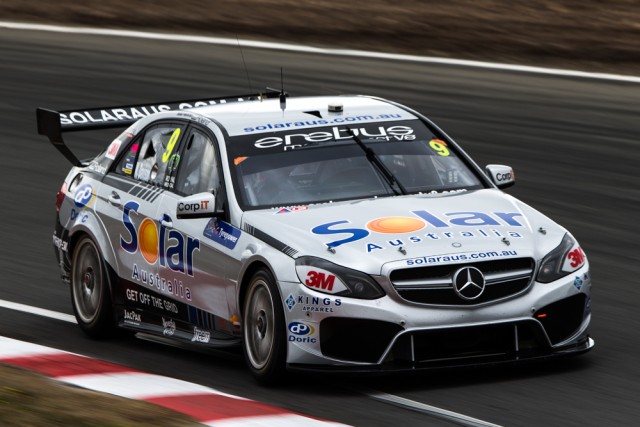 Will Davison’s strong run at Symmons Plains has continued with the #9 Erebus Motorsport Mercedes topping the times in final practice ahead of qualifying.

The former Bathurst winner recorded a 51.7s best with three of the session’s 15 minutes remaining while running a brand new set of hard compound tyres.

The time was enough to edge previous fast-man Craig Lowndes, who did not improve on his own final run.

Shane van Gisbergen also failed to improve late following an off at Turn 6 on his way to third fastest.

Nick Percat was fourth after an overnight engine change in his new Lucas Dumbrell Motorsport Commodore, while Dale Wood completed the top five.

Van Gisbergen wasn’t the only one to be caught out over the bumps at Turn 6, with Fabian Coulthard flat-spotting a left-front tyre with his own off earlier in the session.

He ended up 10th, one place behind Ashley Walsh, who underlined Erebus’ strong showing ahead of the two back-to-back qualifying sessions this afternoon.

“It’s the first time we put a good quality hard tyre on the car,” said Davison, who had been second in Friday’s dry session.

“We knew we were quite good on the used hard yesterday, but we made a very small change to the car because the conditions have come up.

“I had more understeer in a couple of spots than yesterday so we tuned the rear of the car a little bit.

“Clearly we’ve got a good car so I’ve got to make sure we’re up the front (in qualifying).

“Being P1 has blown me away, but I just want to make sure we’re in with a sniff so we can have some good races.”

The first of two 10 minute qualifying sessions for this afternoon’s 60km races will get underway at 1255 local time.