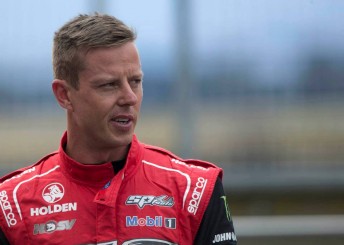 James Courtney says that Will Davison’s actions following their opening race clash added some much needed colour to the day’s track activity at Symmons Plains.

A disgruntled Davison approached Courtney in the Holden Racing Team garage immediately after the race, before labelling the championship leader “arrogant” and “pathetic” on live television.

The initial confrontation was also captured by TV cameras, enlivening an afternoon of largely pedestrian sprint racing at the rural Tasmanian circuit.

“It’s good for the viewers. Everyone wants to see passion,” said Courtney when asked of Davison’s conduct.

“I think that if we’re all robots and no one said anything and just went behind the scenes it’d be pretty boring.

“We definitely need the colour, so good on him for getting fired up.

“I thought it was funny and I think that made him even angrier that I was laughing it off.”

Courtney said he had no problems focussing on the afternoon’s second race, looking at the online fan reaction in the break between heats.

“I was just reading all the Twitter stuff,” he said.

“Some people are for you and some are against you. We were just having a bit of a laugh reading it all.

“Then we had to get serious and unfortunately have another race…”

A pair of third place finishes ensured Courtney retains the championship lead he earned in Adelaide earlier this month.

The HRT Commodore was far from a match for the two Red Bull entries, however, trailing home leader Lowndes by over five seconds in Race 5.

“The car has been pretty good, but these blokes (Red Bull) have just got a bit on us in the first few laps,” he said.

“They get the jump and our car starts to get a bit better. We’ve got a few things to work on overnight and hopefully we can challenge them tomorrow.”