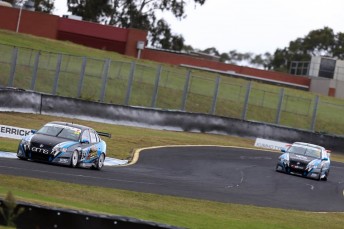 Jack Perkins wins on debut in the Kumho Series

Then came Steve Briffa, Michael Hector and Steve Devjak who had qualified on the front row in an ex-Brad Jones Falcon.

The top 10 was rounded out by rookies Jason Heck, Jason Leoncini and the experienced John Vergotis.

Western Australian teenagers Jake Kostecki, 15, was one lap down in 14th while Alex Rullo, 14, retired after two laps.

Two more races, a 12 and an 18-lap heat, will decide the opening round of the Kumho Series tomorrow. 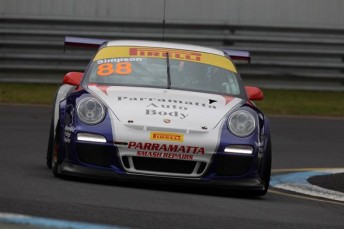 “I nailed the start and stayed ahead of the other guys and tried to get a gap on cold tyres,” Simpson said.

Geoff Emery was the first of the elite drivers home in second held ahead of a charging Jon McCorkindale.

Jaxon Evans mixed it up with the pro and elite runners before coming home ninth on debut, the first of the Class B competitors. 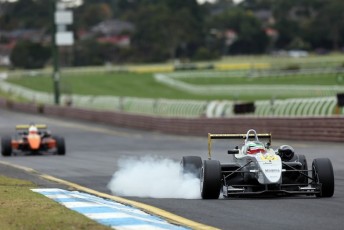 Gilmour Racing driver Jon Collins led from pole however the race was neutralised by a Safety Car which drew Capo into calculations.

Melbourne teenager Capo has upgraded to a Dallara this year which was once driven by Force India F1 driver Sergio Perez in Europe.

A Safety Car brought Darren Hossack’s likely march to victory unstuck with his Audi-Chev overheating during the long caution period forcing him to retired two laps from the end.

Thomas Randle took the win in his Kerrick-sponsored Saab-Chev with the experienced and defending champion Tony Ricciardello second while Kerry Baily was third in his Aston Martin DBR9.

Greg Smith and co-driver Karl Reindler won the opening round in the #78 Radical SR8 V8.

Smith won the first sprint race with Reindler winning the second before the pair then teamed up to comfortably win the 40-minute feature event.

After taking pole, Hamish Hardeman took victory in the opening race for Sonic Motor Racing ahead of team-mate Christian Morina and Jack Spencer, all in Mygale chassis.

The Mitsubishi Lancer EVO driven by Rick Bates, Aaron Seton and Bob Pearson was .3s off in second with the BMW 135i of Iain and Grant Sherrin third fastest and the leaders in Class B.

Polesitter Ben Grice was stymied by gearbox dramas ahead of the final race of the weekend tomorrow.