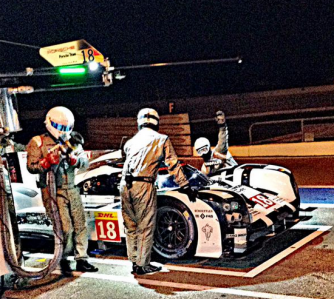 Preparations for Porsche’s second season back in top level prototype racing saw the 919 Hybrids take the top two times overall on the opening day of the prologue tests in France.

The #18 919 Hybrid driven by Romain Dumas established the fastest time in the third and final night time session in 1:37.22s.

The #17 Porsche entry was second fastest in the two-hour night session at the Paul Ricard circuit.

Earlier Dumas’ team-mate Marc Lieb had topped both day time sessions, with his afternoon best of 1:37.965 beating Mark Webber’s best in the #17 machine of 1:3855s.

Audi, which has moved from the 2 Megajoule to the 4MJ hybrid class this season, saw its #8 R18 e-tron quattro record the third fastest time in the darkness, just ahead of the sister #7 entry with Toyota recording the fifth fastest time.

The #47 KCMG Oreca Nissan topped LMP2 while AF Corse and Aston Martin were the pacesetters in GTE-Pro and GTE-Am respectively.

Prologue testing finishes with the second and final day at the southern French circuit tomorrow.