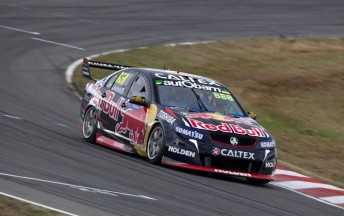 Craig Lowndes has put himself in the box seat for success in today’s Symmons Plains Super Sprints by taking pole position for both races.

The Red Bull Holden ran 51.66s and 51.62s bests in the respective 10 minute sessions to score both Armor All Pole Awards.

With passing expected to be extremely tough around the tight 2.41km venue, Lowndes is hopeful of converting the poles into victories.

“Shippy (engineer Grant McPherson) and I have been working really hard since the start of the season,” said Lowndes.

“This is a track I traditionally go well at and it’s nice to be up the front I can tell you.” 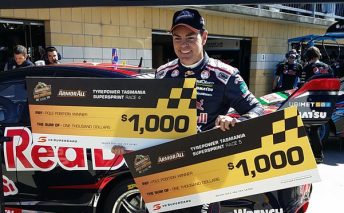 Craig Lowndes with his two Armor All Pole Awards

Race 4 of the season will see Mark Winterbottom share the front-row with Lowndes, while James Courtney, practice pace-setter Will Davison and David Reynolds complete the top five.

Shane van Gisbergen recorded the sixth best time but will lose grid positions to Chaz Mostert and Jamie Whincup after a penalty for contact with Ash Walsh.

The Tekno Holden spun the Mercedes at the Turn 4 hairpin; an incident for which the Kiwi later apologised.

“I just mucked up and locked the rears,” he said. “It’s not a fun walk going to say sorry but it was my mistake completely.”

Will Davison endured a similar incident with Todd Kelly, leaving Erebus with its own front-end damage to fix before the second session.

Rookie Andre Heimgartner was meanwhile the star of the second hit-out, scoring an outstanding fifth in his first outing with the FG X Falcon package.

“The car is absolutely fabulous,” he said, having been 11th in the earlier session.

“We made a little tweak between sessions and it was a jet. It’s great to have me and Dave (Reynolds) up there and lead the PRA group.”

Winterbottom managed only seventh for Race 5, with Davison and Van Gisbergen down in ninth and 10th respectively.

It was a tough pair of sessions for Scott McLaughlin, who struggled to 17th and eighth in his Volvo.

Another buried in the midfield is Scott Pye, who qualified the DJR Team Penske Ford in 15th and 18th for the respective 25 lap heats.