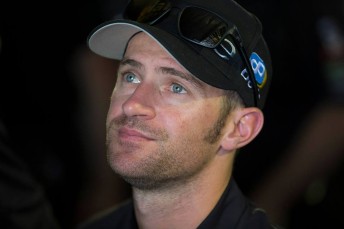 Will Davison has launched a tirade of abuse at V8 Supercars Championship leader James Courtney after a clash in the opening heat at Symmons Plains.

The Erebus Mercedes was tagged into a spin by the Holden Racing Team Commodore at the Turn 4 hairpin while running third on the opening lap.

Davison, who had been among the front-runners in all pre-race sessions, spun to the back of the field and recovered to just 17th by the flag.

The 32-year-old Davison remonstrated with his rival in the HRT garage after the finish before being approached by television cameras.

Investigating Officer Jason Bargwanna looked into the incident post-race and determined that no breach of the rules had been established.

Courtney had protested his innocence on the grounds that he had in turn been hit from behind by Chaz Mostert amid the typical concertina effect of the tight hairpin.

“I’ve had my race ruined by someone being silly,” Davison told V8TV immediately after the race.

“Every time the guy is near me he has got to drill me. He cannot help himself.

“Someone in his position right now, to drive like that, this is a big weekend for us and it wasn’t even an attempt of a passing move.

“It was a complete stuff up. He’s telling me to have a cry and that I’ll be right. The arrogance of the bloke is just pathetic. I feel sorry for him.

“We were going to try and race clean and have a great start and I’ve been turfed. I don’t know what he was thinking.

“He’s always got to rub me up and he thinks it intimidates me. It’s just a shame, it’s not what you want to see.”

Courtney laughed off Davison’s post-race approach, confident that he was not at fault.

“I was being drilled in the back by Mostert which pushed me into him and he’s the one that’s spun around,” he said.

“I can understand his agro, but I just said ‘look mate, have a look at the vision, you’re yelling at the wrong guy’.”

After seeing replays of the incident, Davison added via Twitter that it was “clear as day what happened” and maintained Courtney was at fault.

“I was hit initially which half spun my car, then it’s caused concertina which caused impact into back of #22,” he wrote.

“I’ve got no doubt there was going to be some contact (between Courtney and Davison prior to any other driver becoming involved), but would that have turned Will around and ended his race? Probably not,” he said.

“It was the three or four cars behind that made contact with James that actually turned Will around.

“For me it’s a grey area, a close call, and I’ve erred on the side of motor racing which is, it’s a racing incident.” 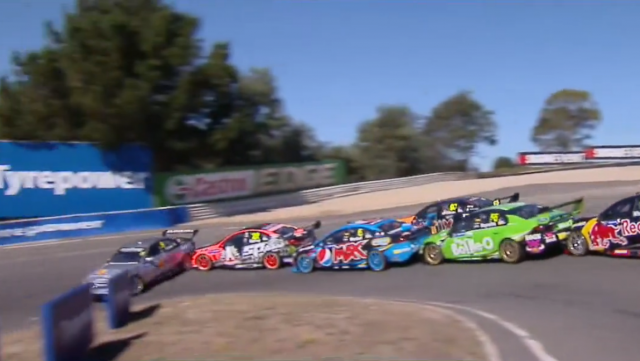 Davison being spun out of third place