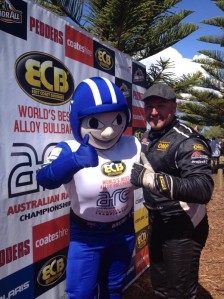 Despite a four-year break between rounds Simon Evans has returned to the top of the ECB Australian Rally Championship (ARC) time sheets and shown he is still the driver to beat at the Quit Forest Rally in Western Australia.

Held along the Busselton foreshore, the ARMOR ALL & STP Power Stage pitted the top crews against each other for the first time in 2015 and it was Evans and his co-driver Ben Searcy (Honda Civic Type R) who came out on top taking the victory by just over one second.

“I didn’t come in with any expectations; I just wanted to do my best – and beat my brother (Eli Evans) of course.”

Tony Sullens/Julia Barkley (Citroen DS3) finished the Power Stage in second; however, their Citroen teammates Eli Evans/Glen Weston had issues with the set-up of their car during qualifying and didn’t make the final, recording the fourth fastest time for the stage.

Adrian Coppin/Erin Kelly (Citroen DS3) finished the Power Stage in third. Steven MacKenzie and Brent MacKenzie (Ford Fiesta ST) were fifth fastest while the combination of Molly Taylor/Bill Hayes (Renault Clio R3) were unable to record a time in the session following a brush with a concrete wall.

“The car was feeling really good, but I got on the power a little too early coming out of the corner and I thought we had it but we just glanced the wall,” Taylor said.

“It’s obviously not ideal but we’re not too stressed about it, we were giving it a crack which is what we are going to have to do all weekend so you’ve got to learn somehow,” she continued.

The Quit Forest Rally officially gets underway tonight when the crews contest the Trade Hire Busselton Super Special Stage around the Busselton foreshore. Over the weekend 60 crews will by vying for top spot in their respective categories.

VIDEO: Highlights from the Power Stage