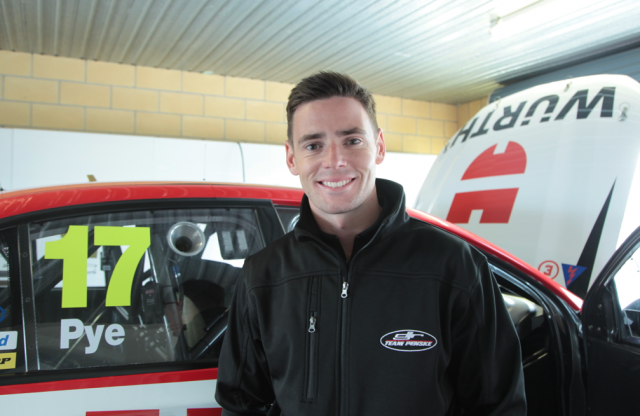 Scott Pye says that aggressive racing will take a back seat to the main goal of steering DJR Team Penske’s technical direction at Symmons Plains this weekend.

The 25-year-old returns to the championship in place of Marcos Ambrose, who cited his own struggle to lead the single-car squad’s set-up direction when stepping out of the seat last week.

Pye’s fortunes will likely be the focal point of the weekend with all eyes, including those of Ambrose himself, on the progress of the #17 Ford.

Ambrose joined Pye and the bulk of the team’s crew on a team-building exercise at Quamby Bluff, near Launceston, on Wednesday and will be in the squad’s garage over the weekend.

While admitting that replacing Ambrose just two events into the year has been “unusual”, Pye says he won’t be feeling any extra pressure to perform.

“The pressure you put on yourself should always be the most,” Pye told Speedcafe.com.

“If we can improve the car then it’s a job well done. We won’t be going out to win it or bin it, because that’s not the purpose of me being here.

“I’d love to win it, but I won’t be throwing away a chance to do more laps with an aggressive move this weekend.

“The goal is different. It’s to be fast of course, but there’s a clear frame of mind and a bigger picture.”

Having been part of the team in Adelaide and Albert Park as it largely struggled with its new FG X Falcon, Pye is naturally keen to sample the car for the first time in today’s practice sessions.

“What we want to do is find the operating window and be able to roll out each weekend with a set-up that we know is close to the mark,” said Pye, who has not driven a racing car since last December’s Sydney 500.

“That’s where I think we’re lost a bit at the moment, we’re not sure where to roll out with the car yet.

“Obviously the balance has changed with the FG X and, after hearing Marcos talk about it, I can finally get a feel for what the balance is like.

“It was tough for him. He only drove at a street circuit last year and has come back with a different car and different balance.

“I want to get a feel on that as well and I can actually contribute then to the direction of the set-up.

“Hopefully with my feedback we can steer the team in the direction that’s best.”

Pye says he has studied data both from Ambrose and technical partner Prodrive, whose drivers Mark Winterbottom and Chaz Mostert dominated at Albert Park.

“I think Marcos is doing a really good job. He made the Shootout at Clipsal and was the highest Ford there (in Sunday qualifying).

“But then to go to the AGP and struggle, we’re not sure where that is. It could possibly be just in the car and that’s what we want to find out.”