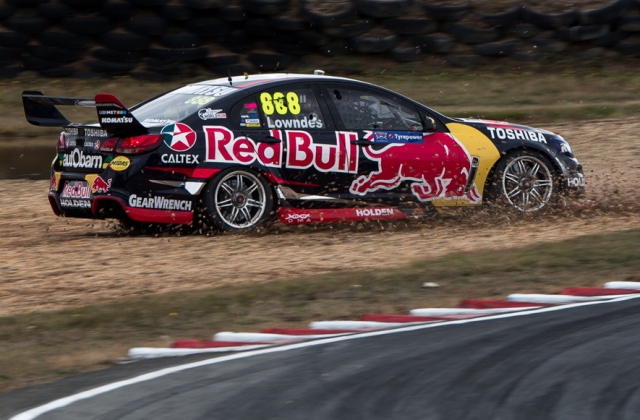 Craig Lowndes spears off backwards at Turn 6 during Practice 2

Craig Lowndes ended practice at Symmons Plains as the fastest hard tyre runner despite a series of spectacular off-track excursions in the afternoon session.

The 40-year-old spun three times on oil-dry put down at Turn 4, which also caught out several other competitors throughout the 60 minutes.

Even wilder moments occurred at Turns 2 and 6, with the latter corner seeing the #888 Holden flying through the gravel trap backwards at high speed.

The Red Bull Holden was able to rejoin under its own power on each occasion and, after bolting on a near-new set of pre-marked hard tyres, jumped to third in the order during the dying seconds. “We were just trying some things,” the three-time champion said of his session.

“The car wasn’t pretty over the bumps into Turn 1 or 2 and the same into 6.

“The oil into 4… we managed to sneak into that a couple of times too. It was just where I wanted to be on the road.

“It’s one of those things. Pushing the limits around here, it’s very easy to go over the line and a couple of times I did.

“It’s lucky we didn’t beach the car. We got it back and the boys weren’t too stressed. They cleaned it up, put some new set-ups on it and away we went.

The team had planned on running a set of pre-marked softs to get a balance read on the grippier rubber ahead of Sunday, but ran out of time due to the incidents.

Regardless, Lowndes later said he was thankful for the longer practice session format being debuted at Symmons Plains this weekend.

“I think the longer sessions are definitely an advantage,” said Lowndes.

“Every time you set the car up you can do bigger changes, instead of trying to luck into a set-up in a 20 minute or half-hour session.

“It definitely gives teams and drivers more of an opportunity to scope where they want to go and what they want to do. It saved my butt today.”

Every driver’s schedule had earlier been severely impacted by the morning’s rain, which ensured the entire opening hour of running was held in wet conditions.