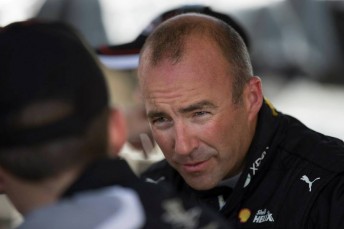 Marcos Ambrose has vowed to return to the V8 Supercars Championship later this season after the “humbling experience” of stepping out of his full-time seat at DJR Team Penske.

In an extensive interview with Speedcafe.com, the 38-year-old detailed his reasons for making the move, which shocked the V8 Supercars community when it was announced last week.

Ambrose says he has struggled to “get a feel for” the current generation V8 Supercars since rejoining the championship last December and refuses to “drag the team down to my level” while it tries to develop.

Planning from early in 2014 to quit NASCAR, Ambrose had played a key role in uniting DJR and Team Penske, committing to the program before the squad confirmed in December that it would scale back to one car.

The driver now admits that he and the team underestimated the challenge of getting up to speed as a single-car operation under the tight confines of the category’s rules and formats.

“Me being the lead driver in a one-car team means I’ve got to lead the team forward by improving the race car and engineering the race car better and ultimately improve race results,” Ambrose told Speedcafe.com.

“It became just really obvious to me after the first couple of races of the year here that, in my situation where I’m at as a returning driver to the series with the testing restrictions, tyre restrictions and formats of the weekend… I just couldn’t lead the team forward like I wanted to or that was expected of me.

“I’m not going to drag the team down to my level to give me the time I need to get going. I don’t think it’s appropriate. It’s not what Roger Penske and Dick Johnson have paid me for.

“They haven’t paid me to learn, they’ve paid me to get the job done. I just don’t feel like I can do that for them at this point.

“It was a humbling thing to go through and a humbling road to walk down, but it’s the right decision for both me personally and for the team to move forward as fast as it can.” 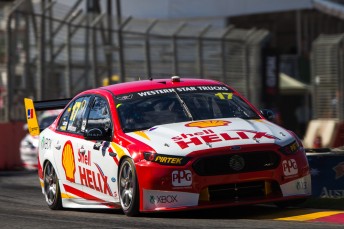 While DJRTP has access to data from Prodrive’s race winning Falcons under a customer deal, Ambrose stressed the team’s need for “more reliable feedback from behind the wheel” of its own car in order to develop.

A typically decisive Ambrose dealt swiftly with questions over the timing of his decision, which came just three events into his comeback and on the eve of his home race at Symmons Plains.

“Emotionally I would have loved to have raced in front of the home crowd, but you’ve got to take emotion out of decisions like this,” he said. “Time is of the essence and waiting another week is just that; waiting.”

Ambrose says he spent several days alone with his phone off after informing the team of his decision on Tuesday, March 17. Having contemplated a trip to central Australia, Ambrose drove solo from the Gold Coast back to his Launceston home.

Although insisting that “my brain is sound and my body is sound”, he conceded that the pressure to perform after nine years away “has not helped the situation”.

A V8 Supercars Champion while at Stone Brothers Racing in 2003 and 2004, Ambrose’s stature in Australia had grown further during his nine years in NASCAR, during which the prospect of an eventual return was always eagerly anticipated.

“Dealing with the expectation of the fans and the sport and the drumming up of the media attention and the glare, it’s a factor,” he said.

“The burden of that, as well as the issues that we have in front of us from a team perspective… it was just too much.”

Ambrose gave a firm “yes” to whether he still believes he can be a front-runner in the right circumstances and says he still has the desire and motivation to continue as a professional driver.

“I don’t think I was never going to get there, it’s just that there is a better solution to where our team is at right now,” he said.

Ambrose has confirmed his intention to race in the Pirtek Enduro Cup “at a minimum”, with an earlier return not being ruled out. He is also expected to run in several Friday practice sessions in the lead-up to Sandown.

While stepping out of the car is clearly at odds with the need to improve his feel for the machinery, Ambrose says that he should not get back into the car until the package has been proven by Pye.

“Until we can get our car more competitive we’re going to have a question mark. Is it me? Is it the car? What is it?” he said.

“Time will help us improve the car and when it does, we’ll be able to make those decisions (about returning) on the feel I’m getting from it and whether it’s going to work out.

“That can’t wait for me to get a feel for the car. They’ve got to move forward.”

Ambrose’s decision to step back after just three events was made all the more surprising by the fact that he’d qualified inside the top 10 on Sunday in Adelaide.

Interestingly, Ambrose pointed to the turn of speed as one of the key triggers for his eventual decision to step down.

“We really picked up our form on the Sunday and ran a second a lap faster than what we had done the day before, but I couldn’t really feel where the speed was gained from,” he said.

“That’s unusual and it’s not right that my lack of feel for these race cars was going to hold us back.”

Ambrose plans to join DJR Team Penske at every event this year, regardless of whether he is driving or not, starting this weekend at Symmons Plains.