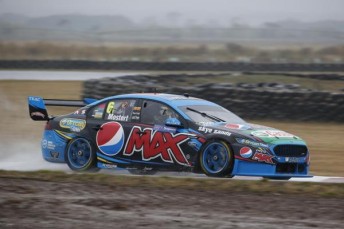 The Pepsi Max Ford driver emerged ahead after all of the eventual front-runners set their best times in the final minutes.

The 22-year-old’s car is being run by the team’s engineering manager Nathaniel Osborne this weekend while Adam De Borre attends an urgent family matter in the United Kingdom.

Mostert’s 1:02.28s best put him just 0.02s clear of second fastest man Will Davison, with the times over 11s adrift of the practice lap record.

“If the weekend is wet then fingers crossed we’ll be up the pointy end,” said Mostert post-session.

“It’s a good way to roll out coming off the grand prix after a string of second places.” Ambrose with Dick and Steven Johnson in the DJR garage

All 10 drivers undercut an earlier time that had seen Coulthard on top when red flags flew to retrieve McLaughlin’s Volvo from the Turn 4 gravel with 11 mins remaining.

A wet track had greeted drivers for the start of the 60 minutes, with the rain proving relatively consistent throughout.

An early effort from Winterbottom put his Prodrive Ford at the top of the order for much of the session as conditions worsened in the middle stages.

“It was really hard to read the conditions,” said second fastest man Davison.

“You’d make a set-up change and then it would rain harder or ease off, so it was hard to gain anything.

“But it was full-on. It’s a tricky little place when the conditions are like that. It was pretty hairy.” 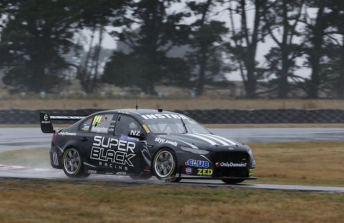 Despite the tricky conditions, the red flags were called just twice. The first came when an oil pressure problem stopped Brad Jones Racing’s #21 Holden in the opening minutes.

Scott Pye meanwhile ended the session 18th as his ‘co-driver’, Marcos Ambrose, watched on from the garage.