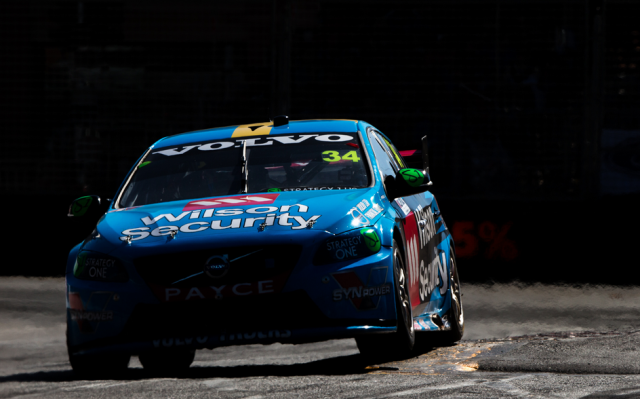 David Wall won’t know until Friday’s first practice at Symmons Plains whether the severe burn he suffered at the Clipsal 500 will impact his weekend.

The Volvo driver sat out Albert Park after doctors warned that racing would risk him losing the big toe on his right foot, which suffered a second degree burn in Adelaide at the beginning of the month.

The 32-year-old has since undergone a further two weeks of rehabilitation, which has included using a portable hyperbaric chamber in the garage of his Sydney home.

“Since Clipsal it has been up and down trying to get things sorted and get the toe and foot to a point where I could get my foot into a boot, forget about race,” Wall told Speedcafe.com.

“It’s not 100 percent just yet and we won’t know until after the first practice if it will affect me in the car.

“I’ve got a lot of things in place with a couple of pairs of boots and things to try to ensure we can get through the weekend.

“After Symmons Plains we’ll have the four-week break where we can focus on getting it back to 100 percent.”

Wall says that minor modifications have also been made to the car to ensure there is no repeat of the injury, which occurred due to sustained heat radiating from the engine bay.

“There was nothing wrong with the car mechanically, but I’m the tallest driver they’ve had so my pedals were a bit closer to the firewall,” he said.

“That and the particular type of boot I was running, which I’ve changed now, probably didn’t dissipate the heat as well as it could.

“It wasn’t just one thing, it was a combination of a few factors.”

Having carried the injury through the final two races in Adelaide using pain killers, many were surprised that Wall was unable to take to the track at Albert Park two weeks later.

The team took the opportunity to run Chris Pither, who is expected to join Wall for the endurance events.

“Before the grand prix I went to a burns unit and they said I’d run the risk of losing the toe if I was to compete in Melbourne,” Wall revealed.

“At that stage I was happy to cut it off to be honest because of the pain, but obviously it dictates your balance and all sorts of things so it’s something I wanted to keep.

“It turned into something far bigger than what I ever expected it to be.”

Wall drove solidly to 17th, 15h and 16th in the three Adelaide races having qualified outside the top 20 on each occasion.

The driver admits that extracting speed from the Volvo remains a work in progress ahead of his second event in the car, but takes encouragement from last year’s Tasmanian event.

“Symmons was a good track for these cars and for me last year,” he said, having qualified as the top Ford on the Sunday in 2014 when driving for Dick Johnson Racing.

“If we can go down there and have a similar result we’ll be happy. The goal always is to be in the top 10, but we’ll have to see where we pop out.”