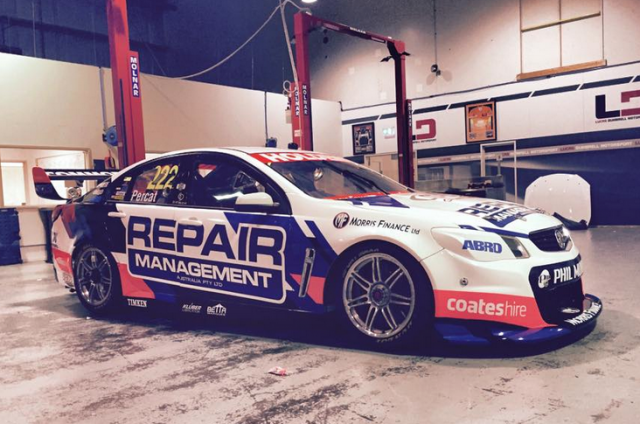 Nick Percat’s Holden has been dispatched to Symmons Plains on an open trailer following a hurried effort from Lucas Dumbrell Motorsport to build-up an ex-Tekno chassis.

The chassis was sourced from Tekno last week after Percat’s regular entry sustained heavy damage in the final race at Albert Park.

Arriving at the team’s Melbourne workshop on Saturday morning fitted only with air jacks and a basic wiring harness, a crew of six LDM mechanics completed the car in less than four days.

With the team’s transporter having departed carrying team-mate Tim Blanchard’s car on Saturday, the Percat entry is being towed on and off the ferry on a trailer by team manager Barry Hay.

Hay paid tribute to the efforts of his team, which had spent last week busily rebuilding components from the damaged car ahead of the arrival of the replacement chassis.

“We were still working on all of that stuff when the body shell arrived at 1am on Saturday morning,” Hay told Speedcafe.com, having made the Wednesday evening ferry cut-off.

“We then had six people working on the car, because any more than that just doesn’t work, basically for 18 hours a day to get it to the point where we started the engine at midday on Tuesday.

“Those guys have had today off to recover before Symmons Plains and I’m driving the car over on the boat.

“It looks nice and old school sitting on the open trailer, but we protected it pretty well with tarps before it went onto the boat.” The purchase of the Tekno car had been delayed last week while LDM finalised the sale of Blanchard’s current car to sponsor Phil Munday.

That car will remain available to LDM until another new chassis is built, after which it will be returned to the colours of Russell Ingall’s last V8 Supercars Championship start.

Blanchard will inherit the car that Percat crashed at the grand prix once it has is repaired at Pace Innovations in Brisbane.

“We think that car will be back from Pace within about two weeks, so when we get it back we’ll give it a full rebuild and hopefully run it in Perth,” said Hay.

“We’re hoping to get another new car built which would become the spare, but it’s not so much of a hurry now that we’re going to have two effectively new and identical cars on track.”

LDM plans to have its new car built by Pace after the team parted ways with its previous chassis fabrication partner, Jimmy’s Fab Shop, last week.

A partially built chassis is currently sitting at LDM but is expected to be on-sold as Hay continues his efforts to lift the team up the V8 Supercars grid.

The team’s three current chassis were all built by Triple Eight Race Engineering over the 2012/13 off-season.

Percat’s Albert Park chassis and its replacement both sat idle last year having been campaigned by Dean Fiore (LDM) and Jonathon Webb (Tekno) in 2013.