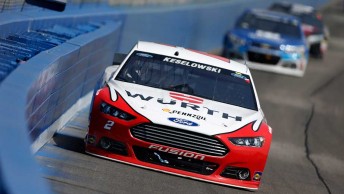 Keselowski has secured a spot in the Chase

Brad Keselowski has led just one mile in winning the Auto Club 400 at California Speedway to take his first victory of 2015.

During a succession of late race caution periods, the race looked to be a fight between Stewart-Haas team-mates Kevin Harvick and Kurt Busch.

However, on the second and final ‘green-white-chequered’ finish, Keselowski split the pair and took the lead heading onto the back straight, which he held to the finish.

The result came down to a four-tyre pit stop under caution prior to the first attempt to finish the race.

While most of the leaders took two tyres, Keselowski put four fresh Goodyear’s on his Ford and stormed through from 17th to sixth and put himself in a position to fight for victory.

He got that chance when Kyle Larson hit the wall and spread debris on the back stretch which brought out another yellow flag.

Then with the extra grip Keselowski, who re-started the final time from the third row, took full advantage and charged by the leaders.

“Kevin Harvick and Kurt Busch, they both did a hell of a job and both had great cars the whole weekend and probably had the field covered on speed, but my guys never gave up, put us in position and we were able to close it out at the end,” Keselowski said.

“We caught some breaks and made the most of the breaks we caught, and that was kind of the story of our race.

“It looked like we were probably gonna finish sixth or seventh there and then that yellow came out.

“We came in and pitted and drove up a little bit. Some guys stayed out. Some guys took two tyres and all kinds of different strategies and on the restart we were able to find our way through the lanes and get to the front there and somehow end up in victory lane leading the last lap.

“That’s kind of a race car driver’s dream and this is one we’re gonna sit back and go ‘wow’ for a while on.”

The result was the 17th victory for Keselowski and he joins his Team Penske team-mate Joey Logano in making the Chase for the Sprint Cup.

Harvick took second to stretch his streak of a first or second place finish to eight-straight races; dating back to his championship winning run last year.