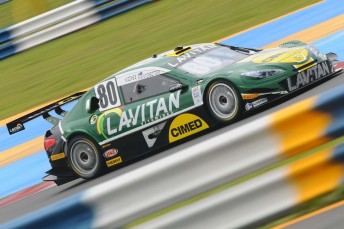 Winterbottom will start second in Brazil

Mark Winterbottom and Marcos Gomes have set the second fastest time in qualifying ahead of the Race of the Duos, the opening round of Brazilian Stock Car Championship.

After a wet practice session in the morning, which Winterbottom and Gomes were third fastest; crews faced dry conditions at the Goiania circuit in qualifying with the temperature of 27ºC also by far the best of the weekend for fast times.

The regular drivers took to the track first, followed by the invited pilots, including Winterbottom and a range of stars from across the globe including many with Formula One experience. The average between the best lap made by driver and co-driver set the time for qualifying with Átila Abreu and Nelson Piquet Jr scoring the pole.

“It’s been great for the team; front-row start is very positive, said Winterbottom.

“We’ve made some changes to the car this morning and in qualifying I felt pretty uncomfortable, but Marcos did a great job. We can win the race, and I think we are in a good position”.

For Gomes, who is making 100th start in the series, qualifying showed the pace of the combination and his goal of not just winning the race but also fighting for the championship.

“Not bad. It is my 100th start and the first race in the team, and we couldn’t got along in a better way,” said Gomes.

“I got the fastest lap of the group; then the track conditions changed a little bit, but it’s great anyway. Mark did an amazing job and we have a long race tomorrow”.