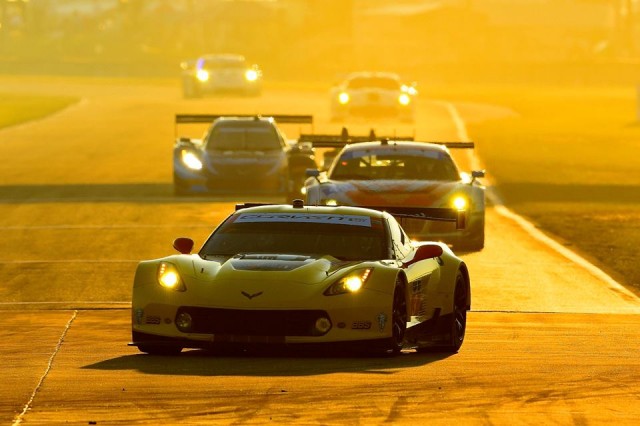 Briscoe and Corvette on the way to victory in GTLM

Australian Ryan Briscoe has helped Corvette Racing to victory in the GTLM class of the Sebring 12 Hours, adding to the team’s success at the recent Daytona 24 Hours.

The Sebring race was a major success for the General Motors brand with Action Express Racing scoring Chevrolet’s second ever outright victory in the 63rd running of the event.

VisitFlorida.com Racing made it an all-Corvette Daytona Prototype sweep of the outright podium after Richard Westbrook found a way around Scott Dixon’s Ford-powered Ganassi entry in the closing minutes.

The #912 entry, whose driving crew included Kiwi Earl Bamber, lost multiple laps with an air jack failure at its final pitstop, while the #911 stopped a short while later with gearbox problems.

Briscoe, this year sharing with Antonio Garcia and Jan Magnussen, adds the GTLM win to his LMP2 class triumph at Sebring with Level 5 in 2013.

“It’s unbelievable,” said a jubilant Briscoe, who is also expected to race for Corvette at Le Mans and Road Atlanta later in the season after missing out on an IndyCar drive.

“We never gave up and just hung in there all day long. It’s a great effort from the whole team, I’m just proud to be a part of this great operation.

“We had so much bad luck last year that I think it’s just turned around. We couldn’t ask for a better start to 2015.”

There was even later drama in the GTD Class as the Alex Job Racing Porsche and Riley Motorsports Viper traded the lead twice in the final minutes.

Mario Farnbacher lost the ascendancy when he locked up and speared off with 10 minutes remaining, only to be handed victory moments later when Jeroen Bleekemolen was forced to pit the Viper with engine problems.

Bleekemolen’s misfortune elevated the James Davison driven TRG Aston Martin to second in class, with the Australian taking the flag less than 10 seconds from the winner.