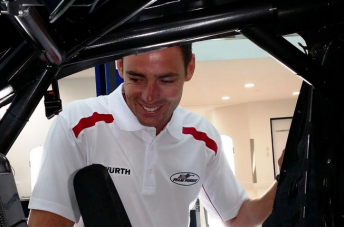 Scott Pye with the DJR Team Penske Ford this week

Scott Pye has described Marcos Ambrose’s decision to hand over driving duties at DJR Team Penske as ‘gutsy and admirable’ as he prepares to take the wheel at Symmons Plains.

The 25-year-old Pye is the major beneficiary of Ambrose’s shock decision to stand down from driving indefinitely after a difficult start to the season.

Pye joined Dick Johnson Racing from Lucas Dumbrell Motorsport last year, but found himself out of a full-time ride for 2015 amid the move back to a single car under the Penske takeover.

Already confirmed to return as an endurance driver, the Brisbane based South Australian attended the Clipsal 500 and Australian Grand Prix meetings with the team, spending considerable time with Roger Penske in Adelaide.

While Ambrose and Pye are both yet to face media following the announcement of the driver change, the latter has expressed his thoughts on the situation via social media.

“I am very excited to have the opportunity to compete for DJR Team Penske in #17 next weekend at Symmons Plains,” he wrote, having been told of Ambrose’s decision just hours before it became public.

“Thank you to all the DJR Team Penske crew and Marcos for putting their faith in me.

“I know I will learn so much from Marcos and having him in the pits will be a great thing for the whole team.

“His decision to step down shows what a gutsy and admirable person he is.

“It’s been tough watching for four months, I can’t describe how much I’m looking forward to putting the helmet back on and climbing aboard the Wurth Falcon FG X.”

Although the switch has been driven by Ambrose, Team Penske president Tim Cindric says he shares the Tasmanian’s faith in Pye’s ability to drive the team forward.

The American stresses, however, that the team must also allow Pye, whose performances will be under immense public and media scrutiny at Symmons Plains, time to settle in.

“Scott hasn’t been in the car or even an FG X, so there needs to be a certain amount of patience there,” Cindric told Speedcafe.com.

“But the difference is he knows what these cars are supposed to feel like. He’s spent time at these venues in recent years.

“So I think he’ll come to grips with it a bit quicker than Marcos will, but it’s going to take some time as well.”

Ambrose competed as Pye’s team-mate at last year’s Sydney 500 and underlined the benefits of his experience in the Car of the Future V8 Supercars machinery in Tuesday’s announcement.

“Scott is a great driver, has already worked with the team and has more experience in these cars, which will give the team the best chance to be successful right now,” said Ambrose.

The opportunity afforded by the Ambrose situation is a reward for perseverance from Pye, whose resolve has been severely tested by a succession of major setbacks over his career.

The driver recently shared images on social media of a 2003 road accident that curtailed his karting ambitions for six months as he recovered in a wheelchair.

Pye also had to deal with the death of his father during the early stages of his open-wheel career, which saw him win races in the Australian Formula Ford Championship as part of the CAMS Rising Star program.

His talent and the assistance of current manager Roland Dane saw a progression through British Formula Ford and Formula 3 before budget constraints necessitated a return home.

An impressive second place in the Dunlop Series with Dane’s Triple Eight outfit in 2012 was followed by a disastrous first year in the main series with struggling outfit LDM, which included several high speed accidents.

He then finished a fighting 16th in last year’s championship with DJR, only to be demoted three places post-season due to a technical breach that resulted in exclusion from five races. 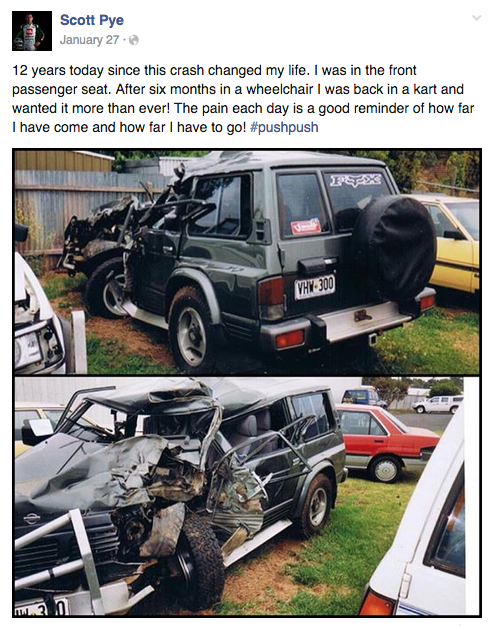 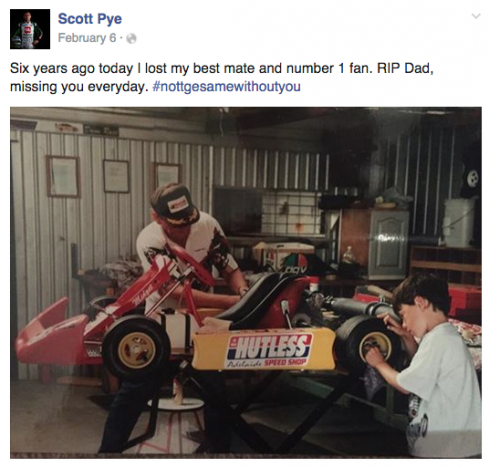