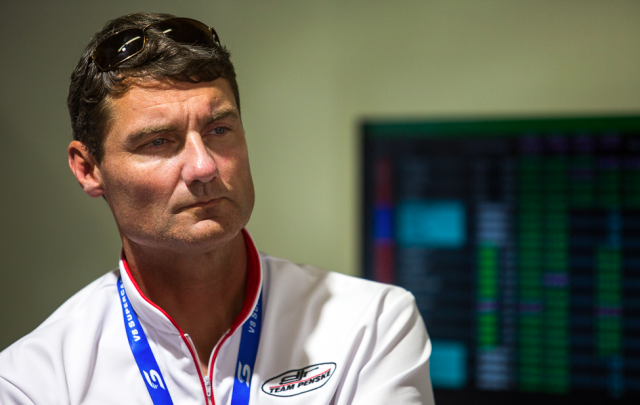 Tim Cindric at the Clipsal 500 Adelaide

CLICK HERE to read Tuesday’s announcement that Ambrose will stand down from driving duties indefinitely, to be replaced by Scott Pye.

SPEEDCAFE: Tim, you described this on Twitter as “unselfish leadership” from Marcos. The news was a shock to all of us here. Tell us more about your thoughts when Marcos came to you about it.

TIM CINDRIC: We are a bit surprised that he feels like the best way forward is to put somebody else in the car short-term.

(But) I’ve got to commend him for putting the team in front of himself. There’s a lot of other guys that would have looked for a different way through the process.

He came in on Tuesday and met face-to-face with (minority co-owners) Dick (Johnson), Steve (Brabeck) and Ryan (Story) and explained his position on everything.

They sat down with Scott and told him why they thought it was the best way forward and then he addressed the team.

When a driver tells you he thinks the car will go faster and get there quicker (with another driver aboard) and puts his own ego aside, I think it’s commendable.

SPEEDCAFE: Do you have a read on when he’s going to be back behind the wheel or are you essentially waiting like the rest of us to see how it’ll shake out?

CINDRIC: I’ve read some of the speculation and this and that, but he’s obviously keen to drive a V8 Supercar.

This isn’t a matter of him running away from it. He’s certainly conscious of how to get the team on their best foot.

Although we’re all patient with him and his progress, I think his expectations were at least to be a little further up the grid in qualifying.

Only he will be able to fully explain it, but it’s important to remember that he hasn’t forgotten how to drive a race car.

But with the limited amount of track time he feels that someone with more experience in these cars will get the car closer, sooner.

How long that takes I think only time will tell.

SPEEDCAFE: You mention the limited track time, which is compounded by limited tyres. Do you think that if someone like Marcos can’t get up to speed, there might be an issue with how that’s structured?

CINDRIC: We’ve raised that question from the very beginning but those on the (V8 Supercars) Board, especially those as competitors, definitely stood strong to ensure that it was hard to get up to speed.

I think it is what it is and the rules are the rules, but you can see how difficult it is for someone to get into the category without having gone through the whole DVS (Dunlop Series) process.

DVS is a good series and, this might be a one-off situation, but I think it’s certainly very difficult to approach it the way we have. Maybe we and Marcos underestimated the task at hand.

The first thing people say is ‘one car versus two cars’ and all that type of thing. That (two cars) would be of benefit, but at what cost?

We felt like our relationship with the Prodrive guys was enough to be a safety net to keep us on path and we utilised that over the past two outings and didn’t seem to make much progress. So that’s where we are. Pye, pictured here with Johnson and Story, will be entrusted with the #17 Ford

SPEEDCAFE: Is it a possibility that you could add a second car, even for selected events this year? Is that something you will entertain?

CINDRIC: These things all take money. Roger explained in Adelaide the process of running one car.

You can see that it’s successful in other camps and we’ve got our hand in our pocket as it is to finance the program as we have it now.

Obviously if a sponsor was to step up and it made sense, it’d be a consideration, but you still have to have the right people behind it.

Quality people don’t fall out of the sky that could work on it. It’s not just a matter of running a second car, it’s not as easy as that.

Our approach is to run a quality car and, when it makes sense, to run a second quality car.

We could have run two, there were opportunities to do that, but not to the level that we wanted to.

We weren’t going to do that just for the sake of it. As Roger has said, we’re here for the long term and we’re going to have to weather a few storms along the way.

SPEEDCAFE: Marcos obviously has a lot of faith in Scott Pye. Do you share that faith and how much pressure does this put on Scott?

CINDRIC: We wouldn’t be doing it if we disagreed to that extent. So the answer is yes, but obviously it won’t happen overnight.

Scott hasn’t been in the car or even an FG X, so there needs to be a certain amount of patience there.

But the difference is he knows what these cars are supposed to feel like. He’s spent time at these venues in recent years.

So I think he’ll come to grips with it a bit quicker than Marcos will, but it’s going to take some time as well.

SPEEDCAFE: You guys have stressed how this is a long term program. So is this a blip in that or a major hurdle?

CINDRIC: It is and it isn’t (a major hurdle). It certainly wasn’t anywhere in our expectations to not have Marcos in the car by the third event, that was certainly outside of what we thought was going to be part of the process.

But I think the thing about Marcos is that he’s an honest guy and he’s genuinely putting the team first. I do believe that.

It’s something that a lot of guys wouldn’t come out and admit. Only he knows where he is in terms of where he feels the capability is.

I think that if ever there’s a difficult time to step out of the car it’s before you go into your home event.

Deciding that it’s time to try something different for a while, knowing that was the consequence, further solidifies that it was the right move, if that’s how he feels.

There certainly wasn’t pressure from the team to make a change. It makes it more challenging for us to answer the questions and the speculation, but we feel like this is the next step of the process.

I think rather than a lot of speculation and a lot of guessing, we’re just going to have to let time tell the story. 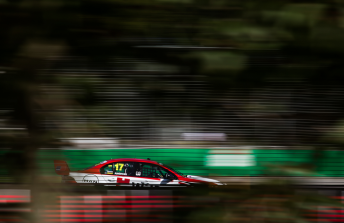 SPEEDCAFE: Other than the driver swap, is any other part of the approach changing? Is there anything else you’re doing to change the engineering resource or anything like that?

CINDRIC: I don’t know how we can put any more engineering resource into something when you can’t have any track time.

You can’t seven-post test, you can’t wind tunnel test and you can’t have any extra track time at all, so I don’t know from an engineering resource perspective what we could do.

We have the entire Prodrive playbook, we think, and they’ve obviously been able to have some success. I don’t know what resource we would be lacking on that side of it.

SPEEDCAFE: You mentioned that you might have underestimated the task of getting Marcos up to speed, but somewhat foreshadowing this situation was the fact you tried to send a car to the US last year.

CINDRIC: We’d interpreted the fact that if you’re not in the series it doesn’t make a difference what you do, but obviously that wasn’t supported (by the V8 Supercars Board).

So instead of making a big deal out of it we said ‘fine, we’ll consider whether we go forward’ (entering the championship).

We went forward anyway (with the DJR deal), but it’s certainly not something we didn’t look at. It just wasn’t supported by the series and its competitors.

That approach certainly would have at least given him a chance… but that is what it is. The series has to decide what’s best for the series.

SPEEDCAFE: Will you have any more dialogue with the category about the testing and tyre restrictions in light of what’s transpired?

CINDRIC: No. That’s not for us to decide. We’ll continue to run our race program within the rules. We don’t have too much influence on what the rules are. That’s been clearly proven.