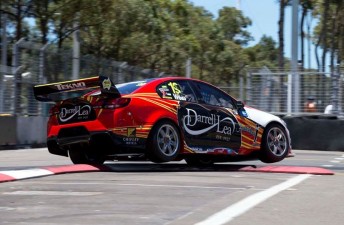 Tekno’s spare chassis will return to the track for the first time since Sydney, 2013.

Lucas Dumbrell Motorsport is racing to prepare a replacement car for Nick Percat to use at Symmons Plains after his regular entry was heavily damaged at the weekend.

Percat was involved in the multi-car rolling start incident in Race 4 at Albert Park, which left the chassis in a far worse shape than initially thought.

The team has struck a deal to lease Tekno Autosport’s spare car, last raced by Jonathon Webb in 2013, ahead of the March 27-29 Symmons event.

The chassis, which currently sits as a shell and wiring harness, left Tekno’s Queensland base this afternoon and is scheduled to arrive at LDM’s Melbourne workshop tomorrow.

With LDM’s transporter leaving on Saturday to join the remainder of the V8 Supercars fleet for the Bass Straight crossing, Percat’s car will travel via a separate ferry on Wednesday night.

Team manager Barry Hay says is crew will be working hard to make the deadline, but stressed that missing the event was never an option. 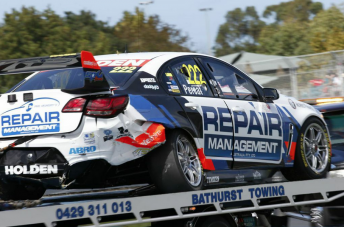 “Everyone chipped in while they could to prepare Tim (Blanchard)’s car, which is just about finished, before prepping stuff to go into the other car,” Hay told Speedcafe.com.

“The excellent thing about Triple Eight cars is that they’re effectively like working on a road car. Where holes and brackets are on one car is exactly the same on the next one.

“The fact that the two chassis were basically built on an assembly line together makes something like what we’re about to do so much easier.

“Wednesday night is the absolute worst case scenario to get it all finished, but we’re hoping to have it done by Monday so the team can finally have a day or so off,” he added.

“I’ve just flogged them since the fifth of January. Everyone works hard but this team has been unbelievable.

“Others have 50 or 60 people and a lot more resources but my secret weapon here is this outstanding group of people we’ve put together.”

LDM currently sits at 15 staff as Hay continues to build up the squad following his arrival in January.

Like the Tekno chassis, the car crashed at Albert Park had sat out last season after being run by LDM for Dean Fiore in 2013.

It will tomorrow head to Pace Innovations in Queensland for repairs before eventually returning to the team.

“It looked like one bar when we looked at it first but once we’d got the coolers out we saw all of those bars around that point had been totally crushed,” said Hay of the damage.

“The right-rear shock point is up over 10mm. Pace will cut it off straight behind the driver’s seat and basically start again.”

Although leased for now, Hay says that LDM hopes to buy the Tekno car, which would then run alongside the repaired chassis when it eventually returns.