Cindric: Ambrose not running away from V8s

Cindric: Ambrose not running away from V8s 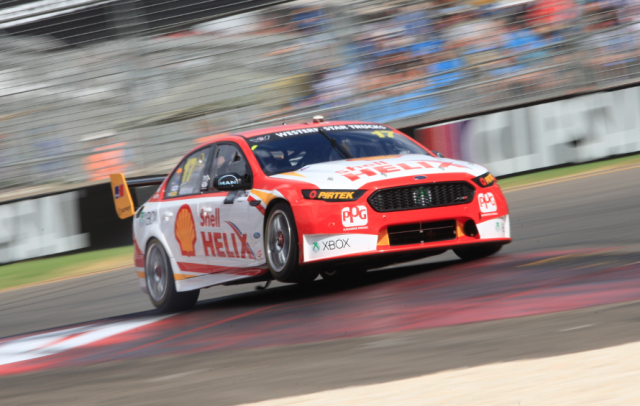 Team Penske president Tim Cindric insists that Marcos Ambrose isn’t running away from V8 Supercars, despite the driver having surprised the American outfit with his decision to step down.

Ambrose’s future in the championship is under a cloud following Tuesday’s bombshell that he will relinquish his seat to Scott Pye for an undefined period, beginning at Symmons Plains later this month.

While Ambrose is currently slated to co-drive with Pye in the Pirtek Enduro Cup races, whether the 38-year-old will ever elect to rekindle his full-time career is currently in doubt.

Cindric has praised Ambrose’s “selfless” decision to step aside after the NASCAR convert struggled to lead the team’s set-up direction in Adelaide and Albert Park.

The American admits, however, that the situation has taken Team Penske by surprise just two events into its foray into the V8 Supercars Championship.

“I think it’s a unique approach,” Cindric told Speedcafe.com of Ambrose’s move, which followed a disastrous run at Albert Park.

“I don’t think he’s got anything left to prove and I think it’s a reflection on him and his overall commitment to the team.

“He’s taken a lot of pride in bringing Roger and the Penske organisation to Australia and linking it with the series and Dick Johnson.

“He feels like if he’s at all the weak link he wants to make sure that it (the team) has a chance to grow as quick as it can.

“If that means stepping aside short-term for it to do that, he’s willing to do that for however long it takes. Hopefully everyone gives it time and that there’s a way forward.

“He’s not running away from it. The fact that he’s even going to Tasmania (Symmons Plains later this month) and taking on all his commitments, even though he’s outside the car, not everybody would do that.” 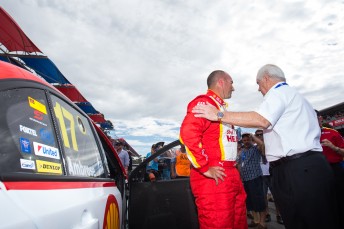 Ambrose with Roger Penske at the Clipsal 500

Upon announcing the DJRTP venture last September, Roger Penske described Ambrose as “the ultimate road racer” while also earmarking his profile as a key tool for building the Penske brand across its growing Australian business interests.

Acknowledging a need to “be patient” and “weather a few storms” in the project’s early phase, Cindric is backing Ambrose to return and eventually deliver.

“Can Marcos Ambrose drive a race car? The answer is absolutely yes.

“Is he the best guy to make the race car fast in the shortest amount of time with the constraints that we’re under? He’s come to the conclusion that he doesn’t think so.

“But I do feel like, once that race car is competitive and he knows what he’s dealing with… I think he can get in and be fast. He’s a winner.

Cindric concedes that the team may have “underestimated the task at hand” when electing to run just a single-car; a structure that has undoubtedly played a role in Ambrose’s struggles.

He has, however, strongly downplayed the chances of adding a second entry for selected events to help Ambrose find his feet.

“These things all take money,” Cindric said of a second car.

“You can see that it (running a single-car) is successful in other camps and we’ve (already) got our hand in our pocket as it is to finance the program as we have it now.”

Running Ambrose during the extended Friday practice sessions, which take place at six of the seven events between now and Sandown, has been earmarked as a possibility, but the team is taking a “one race at a time” approach for now.

“It’s an option and it’s something that needs to be discussed in the future, but in Tasmania it’s not something that we’re considering,” he said of the Friday running.

“But we have another 30 days before Perth to try and understand how we approach it going forward. I just think we’ll take one race at a time and go from there. 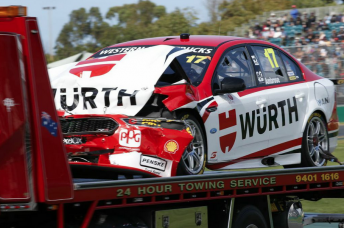 The fourth and final race at the AGP ended in disaster for Ambrose. pic: Peter Bury

Roger Penske and Cindric are both expected to attend the Perth event, which is an important market for Penske’s recently acquired MTU Detroit Diesel firm.

Cindric meanwhile agreed with observations this week that Ambrose and the team have faced an uphill battle to become competitive under the category’s strict approach to testing and tyre rules.

“We’ve raised that question from the very beginning but those on the (V8 Supercars) Board, especially those as competitors, definitely stood strong to ensure that it was hard to get up to speed,” he said of whether the regulations are too tight.

“I think it is what it is and the rules are the rules, but you can see how difficult it is for someone to get into the category without having gone through the whole DVS (Dunlop Series) process.”

Penske had planned to send a car to the US last year in a move that would have helped Ambrose prepare for his comeback season.

Roger Penske then dramatically called off his entire V8 Supercars entry when the plan, which complied to the letter of the rules, was thwarted by the Board.

Ambrose’s unwavering enthusiasm for returning to V8 Supercars was subsequently pointed to by Penske as the final catalyst to reverse his decision and press ahead with the DJR joint-venture.

“That approach certainly would have at least given him a chance… but that is what it is,” said Cindric of the original test plan. “The series has to decide what’s best for the series.”