The man at the helm of Ford Australia when it elected to quit V8 Supercars, Bob Graziano, is set to leave the company on April 1.

The American is headed for retirement after a 32-year career with Ford, including the last four as president and CEO of the Australian division.

Graziano led Ford’s snubbing of its Australian motorsport program, announcing last December that it will withdraw all support from V8 Supercars teams at the end of 2015.

He is set to be replaced by the company’s current vice-president of marketing, sales and service, Graeme Whickman, who is in turn an 18-year Ford veteran in various markets. 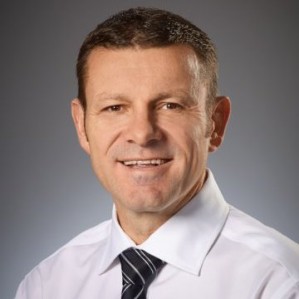 Graeme Whickman has 18 years with Ford in The Americas, Europe and Asia Pacific

While Ford V8 Supercars teams Prodrive and DJR Team Penske have both expressed hope of regaining manufacturer support under future leadership, the appointment of Whickman appears little cause for optimism.

Arriving from Ford Canada in October, 2013, Whickman is said to be cut largely from the same cloth as Graziano and will be focussed on the company’s transition from manufacturer to importer in Australia.

Whickman accompanied Graziano at last year’s Bathurst 1000, where speculation had been rife of Ford’s impending exit.

Its factory squad, Ford Performance Racing, has already rebranded to Prodrive Racing Australia and shed most of its Ford signage amid the scaling back of financial support for the sponsorship’s final year.

DJRTP was already without financial support from Ford but enjoys close ties with the American parent company, leaving majority owner Roger Penske to continually reiterate his preference to stay with the brand.

Both teams will almost certainly continue to run their recently debuted Ford Falcon FG Xs next year before the 2017 arrival of the Gen2 regulations, which are expected to draw more marques enter the category.

Boasting improved aerodynamics over the previous FG model, the FG X package is off to a flying start, with Prodrive taking a sweep of one-two finishes at its second ever race meeting last weekend.