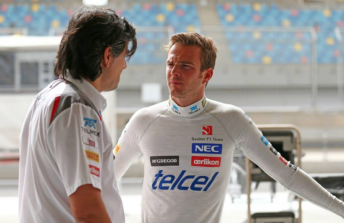 Giedo van der Garde has been compensated by the Sauber Formula 1 team following the termination of his contract by mutual consent.

The Victorian Supreme Court ruled last week that van der Garde held a valid contract to race for the Swiss outfit, who had also signed drivers Felipe Nasr and Marcus Ericsson for the 2015 season.

Despite winning the case, a lack of a Superlicence prevented him from racing at Albert Park, resulting in van der Garde relinquishing his right to drive pending further settlement talks with the team.

The former Caterham F1 driver has subsequently issued a lengthy statement heavily criticising the team’s handling of the situation, while also stating an end to the case and his F1 ambitions.

He also confirmed that a sponsors fee relating to his 2015 drive was paid to the team last year, which he claims helped keep the outfit alive.

The Dutchman hopes his case will prompt the sport to take further action to prevent similar situations occurring in the future.

Read the full statement from Giedo van der Garde below

We have reached a settlement with Sauber and my driver contract with the team has been ended by mutual consent. As a passionate race driver, I feel sad and am very disappointed.

I have worked very hard my entire career, ever since starting with go-karts at the age of eight, to live my dream and become a successful Formula One driver. I had hoped at last to be able to show what I am capable of, driving a car for a respected midfield team in the 2015 season. This dream has been taken away from me and I know that my future in Formula One is probably over.

I had a valid driver contract for the entire 2015 season and enforceable rights to it. I pushed very hard until last Saturday in Melbourne to get the drive that I was entitled to. This legal process started in 2014 and has taken a great deal of effort. It was never a last minute thing, but it only became public in the last week when we tried to force the team to accept the rulings of a succession of legal authorities and courts.

I am a race driver and all I want is to race. However, the team principal was adamant not to let me drive, notwithstanding my legal rights to do so and a series of rulings and court orders in my favour and despite my race driving abilities. I will never understand this.

I could have persisted, but the team principal had taken a decision contrary to my contract that she would not work with me and this became painfully clear in the paddock in Melbourne.

To push on against this determination might have brought down the team, it would most certainly have wrecked the opening Grand Prix in Melbourne because the team´s cars would have been seized by the court, it may have ruined the careers of two young drivers Marcus Ericsson and Felipe Nasr. Possibly the team´s directors would even be taken into custody. I decided I did not want to live with that idea, even though it was only the team’s management that was responsible for the bizarre situation I found myself in.

I am very grateful to my fans and many friends in Formula One who have given me a lot of support during the last couple of months. This period has been very difficult for me especially since I could not talk to anybody about the pending proceedings.

Last week, many drivers on the grid gave me their support and several of them did so openly in the media as well. The same goes for several leading figures in the paddock who include team bosses and reputable former Formula One drivers. I thank them as well.

My future in motorsport has not finished: on the contrary, I see this as a new beginning. I will sit down with my management in the coming weeks to discuss my future plans. I would love to take part in the WEC and the Le Mans 24 Hours in an LMP1 car. Former Formula One drivers do very well in this series. We also have our eye on other series such as the DTM in 2016 and beyond.

There has been a lot of speculation in the media over the past week, so I want to set out clearly that my sponsors paid the sponsorship fee related to the 2015 season in its entirety to Sauber in the first half of 2014. This was simply in good faith and to help the team deal with its cash problems at the time. Effectively, it was my sponsor’s advanced payments that helped the team survive in 2014.

Sauber’s financial decision-making in this case is bizarre and makes no sense to me. I am not at liberty to discuss details, but Sauber paid significant compensation to avoid honouring the contract they had with me. Only in that respect can I be satisfied that my rights have finally been recognised and that at least some justice has been done.

I want to thank McGregor for sponsoring me from the time I won the Formula Renault 3.5 Ltr. Series in 2008. I hope we can continue to build on this as my motorsport career goes forward in other series.

I want to thank my family, my father Gerrit and my wife Denise in particular, for their tireless support throughout the years that I have been chasing my Formula One dream. The last couple of months have been especially hard for me but they have always stood by me.

Of course, I also want to thank my father-in-law, Marcel Boekhoorn, who has been a great supporter during my entire career through the motorsport ranks. Without him, I would not have got this far.

I also thank Jeroen Schothorst and Jan Paul ten Hoopen for managing my career and business affairs since 2008 and in particular for their unconditional support during these last four and a half months. I also extend thanks to my legal advisor Gijs Rooijens and the law firms, Druces, Blackstone Chambers and King & Wood Mallesons (Australia), that worked very hard and enthusiastically – sometimes literally day and night and during weekends – to fight for my rights.

Finally, I would like to direct a few words to the teams, drivers, future drivers, their managers and the Formula One governing bodies. I sincerely hope that what has happened to me will start a movement aimed at setting new standards and bringing about new regulations to help protect the rights of drivers. I would like to think that the values and business ethics that apply in any other business should be equally applicable in Formula One.

I am lucky to have had Marcel and Jeroen on my side. Both of them have extensive backgrounds in business and bring a lot of expertise to the table when it comes to resolving complicated business affairs. Without them, I would have remained empty-handed in the wake of this extraordinary affair.

There are numerous examples of talented drivers with good intentions but without the sort of professional support that I have had, who have been broken by Formula One and who have seen their careers destroyed.

I therefore hope that my unprecedented case which was heard last week by the Supreme Court of Victoria at Melbourne will serve as an example to illustrate what should change, and that new regulations will be implemented to help protect driver rights.