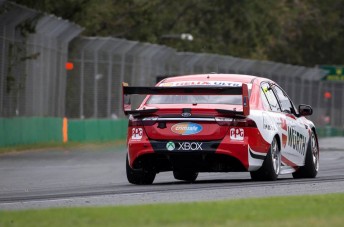 Marcos Ambrose will step aside for Scott Pye in Tasmania

Marcos Ambrose’s stalled V8 Supercars comeback has thrown a spotlight onto the category’s strict rules on testing and tyre allocations.

The former two-time V8 Supercars champion has stepped down from full-time driving at DJR Team Penske just two events into the season, the team announced on Tuesday.

The driver’s decision shocked both the team and the wider V8 Supercars community following an off-season dominated by talk of the 38-year-old’s return from NASCAR.

Ambrose stressed in a statement that he “needs more experience in these cars to do what is required of the lead driver and to be competitive for the team”.

Pitched back into the championship in a single-car squad running an unfamiliar FG X Falcon, Ambrose struggled to find a set-up direction across the Adelaide and Albert Park meetings as he attempted to adapt his driving style to the car.

A Top 10 Shootout appearance in Adelaide came after direct set-up assistance from technical partner Prodrive and sits as an outlier among an otherwise largely uncompetitive list of session results across the three events contested since his comeback.

DJRTP technical director Nick Hughes noted after Adelaide that “if we had someone with more experience in the car it would probably make it a bit easier”.

While many have questioned how stepping out for Scott Pye at Symmons Plains will help his own learning process, allowing the team to assess its current package through Pye has been hailed by Team Penske president Tim Cindric via Twitter as “unselfish leadership”.

The decision comes after Ambrose saw first-hand the benefits of Pye’s experience with the Car of the Future generation V8 Supercars when they ran as team-mates at last year’s Sydney 500.

Ambrose is only currently guaranteed to return to the wheel for the Pirtek Enduro Cup races, but could be back sooner pending the team’s fortunes with Pye aboard.

Although DJRTP undoubtedly made it harder for Ambrose and ultimately itself by electing to run just one car, V8 Supercars Hall of Fame member John Bowe believes that the situation is a lesson for the category. 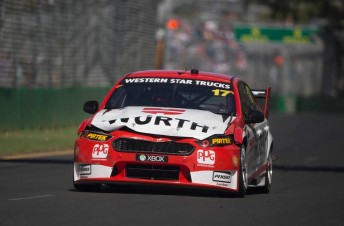 In addition to strict limits on testing, which this year sees just one private day per team, the championship has continually cut its tyre allocation in the name of cost saving.

With qualifying positions vital in the highly competitive category, experience driving and setting up the cars to maximise the grip afforded by a new tyre is more critical than ever.

Those to have made successful transitions to the championship over the last few seasons – namely Scott McLaughlin, Chaz Mostert and Nick Percat – have all entered with recent V8 Supercars experience via both the Dunlop Series and endurance events.

While Pye, a Dunlop Series contemporary of the aforementioned trio, could have undertaken set-up work for Ambrose as an additional driver in the extended Friday practice at Symmons Plains, a lack of decent pre-marked tyres to use ensured it was not a viable option.

“The key thing is that Marcos has had to do all his learning of the current V8 Supercars and unlearning of the NASCAR way in public,” Bowe told Speedcafe.com.

“Back in the day when (Craig) Lowndes started in V8 Supercars, he tested for a year before he raced and when (Mark) Skaife was in the Gibson team they used to test every single week.

“I don’t agree with unlimited testing but at the moment it’s way too tight. For guys coming in, even those coming from the Dunlop Series now, the main game is such a different level.

“They’ve cut back the tyres again this year which makes it even harder and is not right. Frankly I think it’s ridiculous.

“In the whole scheme of things the amount of money they save (on tyres) is very minor.

“If they don’t open it up (tyres and testing) you’re just going to have the same blokes cycling around up the front.”

Bowe describes Ambrose’s decision as “very brave on his part and it’s a very honourable thing to do for the team”, but is circumspect on whether it will help his fellow Tasmanian’s plight. Young stars like Scott McLaughlin, left, have been groomed to race V8 Supercars over several seasons

In addition to the limited testing and tyre rules, V8 Supercars’ 14 event schedule is a stark contrast to the minimum 36 weekends of racing that Ambrose had been running in NASCAR.

Another Tasmanian, Owen Kelly, has also transversed the NASCAR/V8 Supercars divide and says the differences between the way the categories operate has made Ambrose’s task particularly difficult.

“If you look at what Marcos has done, from my experience in the US, you’re in a race car three days a week and you’re being given new tyres all the time,” Kelly told Speedcafe.com, having made several road course starts in NASCAR’s Xfinity and Sprint Cup Series.

“Going from that to somewhere where you’ve got big gaps between events and you’re picking through tyres that are left over from last year… it makes it very difficult.

“To be honest, after only a couple of runs on new tyres, I thought he did an amazing job to make the Shootout in Adelaide.”

In a sign of dedication to DJR Team Penske and its commercial partners, Ambrose will attend the upcoming Symmons Plains event with the team.

Roger Penske had last year described Ambrose’s commitment as the catalyst for giving the green light to a V8 Supercars entry for his team, signing the driver to a two-year deal.

Ambrose has continually hosed down expectations for his return, poignantly noting on the eve of February’s pre-season test that he was sure of the team’s eventual success, but not his own.

“Whether it’s me as a driver or the next wave, this organisation will win races and contend for a championship,” he said. “I hope I’m the driver for them, but I’m going to help them get as far as I can.”