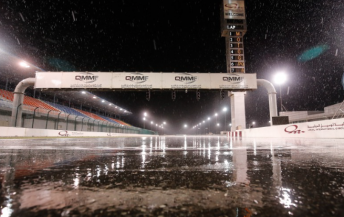 Heavy rain made testing impossible at the Losail Circuit

Heavy rain at the Losail circuit saw Race Direction initially delay the start of the test before the treacherous conditions left officials with no option but to abandon the event.

The decision means Ducati leaves the final pre-season hit out on top with Andrea Dovizioso posting the fastest time of the entire test.

Ducati’s impressive showing came without the use of the soft compound tyres available to the team, virtue of the squad having not tasted a victory in dry conditions since 2013.

The performance of the GP15 has seen Ducati emerge as genuine contenders heading into the 2015 season.

Although concerned by their speed, Honda’s Marquez believes team-mate Dani Pedrosa and Yamaha will be his main rivals this year.

“I believe they’re not using the extra-soft tyre to avoid creating a scare, because their lap-times would quickly drop by one second,” said Marquez.

“At the end of the day, it’s clear that our rivals are the Yamaha riders and Dani (Pedrosa) – they are our rivals for the championship.

“At some specific point, the Ducati will be there at the front but they have this ‘handicap’ of losing some of their advantages if they get good results, so yeah, I know who my rivals are and who I have to keep a close eye on.”

Australia’s Jack Miller ended the test in 21st position with the Queenslander’s personal best 1.8s adrift of the outright pace.

The MotoGP teams will return to the Losail circuit for the opening round of the championship on March 28-29.