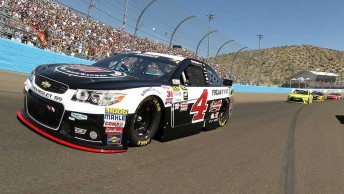 No one is hotter than Kevin Harvick

Kevin Harvick has again been the class of the field in the NASCAR Sprint Cup, winning at Phoenix.

To put it into context it was his fourth-straight race win at Phoenix, second-straight victory after winning at Las Vegas last week, and his seventh-straight top-2 finish dating back to the end of last season’s championship run.

Starting from pole Harvick ran at or near the front and led the most laps on the day.

His biggest challenge came from team-mate Kurt Busch, who was returning from suspension. Busch pushed Harvick with around 20 laps to run when a caution flew. Busch decided to pit for four fresh tyres and charged back to fifth by the end. Busch not second-guessing his decision after saying he had used all his tyres trying to fight with Harvick.

Tyre issues had a presence with Dale Earnhardt Jr., Tony Stewart and Sam Hornish Jr, in Marcos Ambrose old no.9, all blowing tyres and finding the fence.

No such dramas for Harvick, who despite having plenty of pressure from Jamie McMurray on the final two re-starts kept his lead through to the finish.

NASCAR stays on the US West Coast next week where it will race at Fontana in Southern California.