Having finished second fastest on the opening day, it was Dovizioso who emerged on top with the Italian posting a 1:54.907s effort to break Stoner’s 2008 lap record by 0.2s.

Marquez, who worked on his set up for the season opening race at the venue, ended the day just 0.184s adrift of Dovizioso with Iannone a further 0.013s back in third.

Ducati tested a new exhaust with its riders while the Desmosedici also featured winglets for the first time since 2010.

Yamaha occupied fourth and fifth with Jorge Lorenzo and Valentino Rossi showing signs of improvement. The pair remained half a second adrift of the pace-setting Ducati.

Honda’s Dani Pedrosa clocked the sixth fastest time as he continued to evaluate new forks on his RC213V.

Cal Crutchlow turned heads once again on the LCR Honda with the Brit quickest of the satellite team riders in seventh.

The Tech 3 Yamahas of Bradley Smith and Pol Espargaro were eighth and ninth with the former testing a new swingarm on his machine. 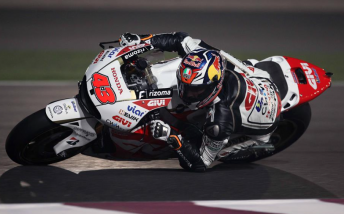 Karel Abraham rounded out the top 10 while Suzuki struggled to surpass the performance of the first day with Aleix Espargaro 12th and Maverick Vinales 14th respectively.

Australia’s Jack Miller managed to shave 0.5s off his best time to finish in 21st spot as he continued his transition to premier class machinery.

“I’m very happy with today, and although it’s not quite what I want just yet, we still made some more improvements and got that bit closer to the front once again,” said Miller.

“I also made the lap time all alone, which is a positive for me and honestly a real boost.

“I’m feeling really good on the hard tyre, even when it’s got full race distance on it.

“That’s why I’m looking forward to the race simulation we will try tomorrow and also trying to put in some faster laps in the early stages tomorrow when the track is perhaps at its best.”