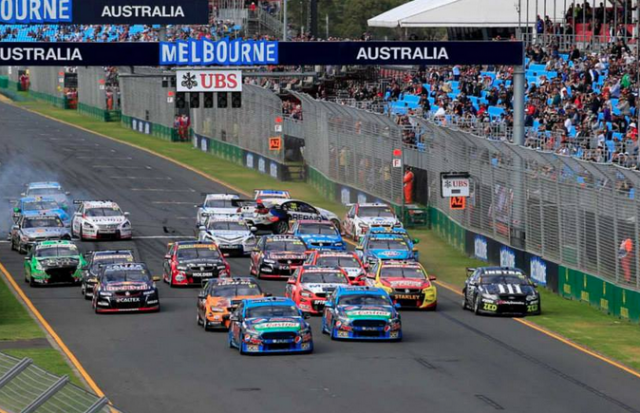 The use of rolling starts for Albert Park’s V8 Supercars races has come under fire amid claims that Prodrive orchestrated an accident in the weekend’s final heat.

In place to increase the spectacle at an otherwise simple sprint race format, the starting procedure sees the field waiting for the leader to accelerate at any point within the ‘AZ zone’ on the front straight.

Having accelerated early in the opening three races, Winterbottom waited until the zone’s final metres before gunning his Ford in Race 4.

Chaos ensued behind as backmarkers attempting to pre-empt the start fired into the midfield. 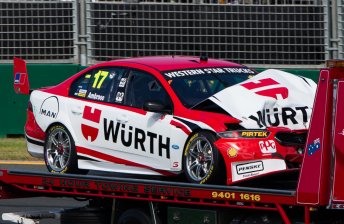 Marcos Ambrose’s Ford took the brunt of the damage

The cars of Marcos Ambrose and Nick Percat were eliminated on the spot while several others also took damage.

The impact of Winterbottom’s changed strategy for the final race was not lost on key rivals; many of whom had saved better tyres to try and break Prodrive’s stranglehold on the weekend.

“That was fully intentional… he did that to cause a shunt. There’s no question,” Red Bull team manager Mark Dutton told Speedcafe.com.

“What would you do if you’d used all your tyres early and others were on better tyres? What’s the best way? Reduce racing laps (by causing a Safety Car). It’s a strategic move.

“(But) it’s in the rules, there’s nothing wrong, I hold no qualms about it.

“The problem with the procedure is you don’t want the domino effect of waiting for the person in front to go,” he continued.

“On a normal start everyone is going off the lights, so it’s the same go point for everyone and there’s no domino. But here, people try and get a jump.

“What they (Prodrive) did was smart because they did exactly the same thing in the first three races and then did something different in the last race.”

Others also noted that the sister Prodrive entries of David Reynolds and Andre Heimgartner, starting back in 15th and 18th respectively, had been among the first to jump before Winterbottom, contributing greatly to the chaos.

Reynolds jumped to the right of the pack while Heimgartner went left, with the Super Black entry having leaped almost to the front of the pack thanks to his move.

Both later received 10 second post-race penalties for an “incorrect starting procedure”. They were the only drivers penalised in the incident.

Winterbottom later said that the starting strategy had been based around helping Mostert maintain second; a position he had lost off the start in Race 3.

The race winner noted that “everyone was in on the plan” after discussions in the team’s transporter.

“We chatted for hours in the truck about when we were going to go and all of that sort of stuff,” he said.

“What I did was to favour him (Chaz) really because when you’re on pole you’re always going to get away because they can’t go until you go.

“I tried to help Chaz to keep second (and) it’s nice that we’ve got a team we can do that in.

“You say you’re going to go at this point and you do it. There’s guys from the same teams that would say they’re going to go here and they’d fox and try and screw the other bloke over.”

Winterbottom however called “bullshit” on suggestions that the accident had been his fault.

“If you’ve got the pole you’ve got the right to go when you want and if they predict you’re going to go in the same spot, it’s not your fault, it’s their fault,” he said. “But that’s what that start does.”

Dutton was one of several to suggest that any future rolling starts utilise a green light, rather than rely on the lead car to accelerate away.

“Rollings starts are fine but you’ve got to have the lights,” he said.

“When the lights go everyone can race. Then you don’t have engineers calling the start.

“It’s a flawed system and when you bring the tyre strategy into it too, that’s what happens.” 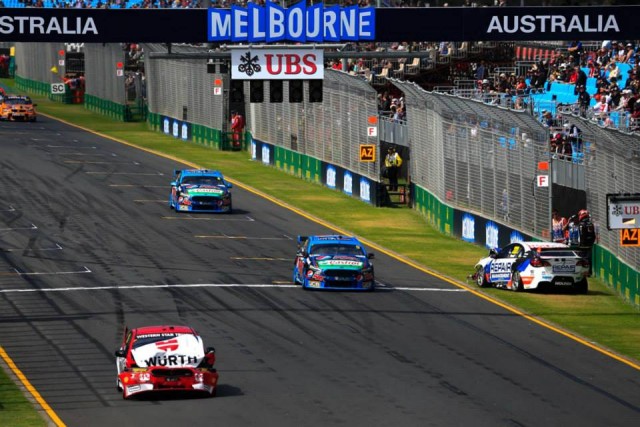