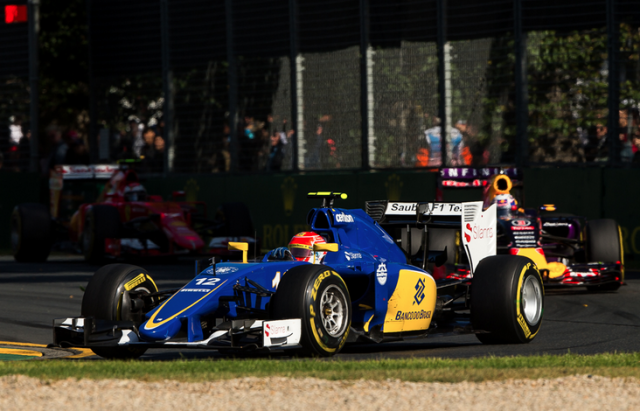 The Sauber F1 Team cast aside a week dominated by legal proceedings that threatened to keep them from the Australian Grand Prix grid by sensationally breaking a 19-race points drought.

The team was one of just three to get both of its cars to the flag in the 58 lap race, with rookie Felipe Nasr scoring fifth and Swede Marcus Ericsson in eighth.

The result marked Sauber’s biggest ever points haul in Australia and its first points finish since the 2013 season finale in Brazil.

Both cars had missed Practice 1 on Friday while legal action brought about by scorned driver Giedo van der Garde played out in court rooms in Melbourne’s city centre.

Question marks over the squad’s participation in the race lingered until Saturday morning, when a temporary peace deal between the parties was struck.

“It was a challenging weekend which had its downs and finally it ups, which is very good,” reflected team principal Monisha Kaltenborn, who had come under heavy fire from the press for her actions in the debacle.

“It’s a great motivation for the team which has worked very hard both here and at home throughout the winter.

“It wasn’t always easy to come up with this kind of a product. We could see in winter testing that it’s more competitive but we still have a long way to go.

“To start the season in this way is something fantastic.”

The 22-year-old GP2 graduate Nasr cast aside dispersions over his status as a ‘pay driver’ by consummately holding out the advances of local hero Daniel Ricciardo in the battle for fifth.

“It is such a big relief for the team and myself that we are able to score points, and I am very pleased about this achievement,” he said.

“It was a tough race. Right after the start it was quite messy in Turn 1, as another driver hit my wheel (Pastor Maldonado).

“I thought the car was damaged a bit, but after a few laps I noticed everything was fine. After that, the race went according to plan.

“There was pressure from behind during the whole race, which was not easy. That was an emotional race for me and everyone in the team.”

Sauber undoubtedly benefited from a much improved Ferrari engine package, which the factory team used to score just its third podium in over 15 months.

The customer team now appears to be in the heart of the mid-field battle behind Mercedes, Ferrari and Williams, although Kaltenborn was wary of drawing conclusions from a single race.

“It’s far too early to say from one race,” she said.

“We are in the middle group, but it’ll vary from race to race and track to track whether you are at the front, in the middle or at the back of that group.

“But the point is that we’re in that group and of course we want to position ourselves to be at the front.”