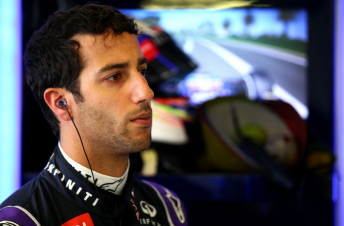 Daniel Ricciardo said he felt sorry for Australian fans after finishing his home grand prix a lap down in his struggling Red Bull-Renault.

The local hero took the flag in sixth place having spent the majority of the race behind rookie Felipe Nasr’s Sauber.

Ricciardo had also trailed another rookie, Carlos Sainz Jr, in the Toro Rosso during the early stages after a poor start; reclaiming the place only when the Red Bull junior team miscued a pitstop.

With a troublesome Renault engine that Red Bull team principal Christian Horner estimates as 100bhp behind the front-runners, the only real positive for Ricciardo was that he finished.

“We obviously got away with some points but other than that there’s not much more,” reflected Ricciardo.

“Reliability at least, we got to the end so we’ve got a lot of data to look at and try and make something of it. But we got lapped so we’ve obviously got some pace to find.

“I was trying the whole race just to make something happen. I could get close to the Sauber but then just didn’t have the legs to do much with it.

“It was a little bit of a boring race, there wasn’t too much going on, finding things to do in the car.

“I feel a bit sorry for the fans. It probably wasn’t the most exciting race in the world but hopefully the next few can turn around a bit.”

Horner praised Ricciardo’s gallant effort after watching the team’s second car of Daniil Kvyat having failed on the way to the grid.

“I think he squeezed every ounce of performance out of the car,” said Horner of Ricciardo.

“We’re probably 100 horsepower down on Mercedes at the moment and I think he got everything out of it that he possibly could.

“There’s absolutely no fault with either driver this weekend.”

The lacklustre weekend on-track for Ricciardo followed a whirlwind lead-up for the 25-year-old as the race’s poster boy.

Ricciardo must now prepare for the Malaysian Grand Prix in two weeks time knowing that there is no short-term solution for Renault’s issues.

“We won’t over analyse it,” he said of the weekend.

“We all know where we stand and what we’ve got to do, so just get the basics right and try and find something if there’s an obvious thing that’s missing.

“I don’t think there is, I think we know, but if there’s something else we’ll just try and get on top of it sooner rather than later.”