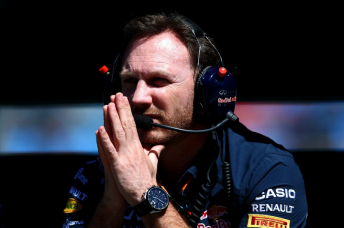 Red Bull Racing boss Christian Horner has called for the FIA to take action over engine disparity in Formula 1 amid fears Mercedes’ dominance will hurt the sport.

Horner’s team has slipped further down the competitive order this season as engine supplier Renault grapples with the current hybrid power unit technology.

Last year’s champions Mercedes have meanwhile increased their dominance, romping to a one-two finish in the season opening Australian Grand Prix with an engine Horner estimates has 100bhp more than the Renault.

Horner points to a succession of rule changes that took place during Red Bull’s four championship years from 2010 to 2013 as a precedent for legislating to slow down the pace-setting team.

“When we were winning, and we never were winning to the advantage that they have, I remember double diffusers were banned, exhausts were moved, flexible bodywork was prohibited, engine mapping mid-season was changed; anything was done (to bring Red Bull back to the field),” he said.

“And that wasn’t unique to Red Bull. Whether it was Williams in previous years (that were winning) or McLaren, etc, etc.

“The FIA within the rules have an equalisation mechanism and I think that’s something they need to have a look at.

“I would fear that interest will wane,” he added when asked of the potential consequences of the current domination continuing.

“I didn’t see much of Mercedes on the TV this afternoon and I can only image that was because it’s not interesting watching a procession. The highlight for me was seeing Arnie (Arnold Schwarzenegger) on the podium.

“The FIA have a torque sensor on every engine. They have a power output that they can see which every power unit is producing.

“They have the facts. They could quite easily come up with some form of equalisation.”

Horner also pointed to Honda’s struggles on return to the championship this weekend when musing over the intricacies of the current rule package.

“Looking at a company the size of Honda, the preparation time that they’ve had, to come here and be so far off the pace on the back of the grid, it demonstrates how hard it is,” he said.

“Maybe these things are just too complicated. Off the back of that is cost and that is why teams are in trouble. Manor couldn’t even start their car. How right is that?”

Horner vowed that Red Bull will continue to work closely with Renault, which still has a significant portion of its engine development tokens for the year remaining.

He rejected suggestions that his team had been embarrassed by its own junior squad Toro Rosso, which is the only other team fielding the French powerplants.

Rookie Carlos Sainz Jr ran ahead of Daniel Ricciardo’s Red Bull for the opening stanza of the race before a pitstop issue cost the Spaniard time.

“Not really,” said Horner of whether Toro Rosso’s speed was a concern, “because I think it (the engine’s driveability problems) mask so many things regarding corner entry, corner exit, degradation, slip control of the tyre.

“You’re not able to drive the car properly. So then you start moving your brake balance around to try and compensate and you are so far away from optimum you start to lose temperature in brakes and then the tyre aren’t working as they should. It’s a spiral effect.

“They’re struggling the same amount it’s just having a more dramatic effect on our car.”