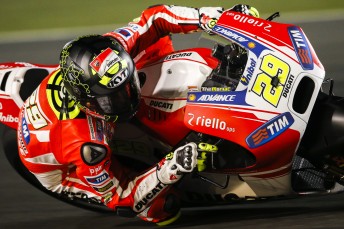 Andrea Iannone starred on the opening day of testing at Qatar

The factory machines of Andrea Iannone and Andrea Dovizioso topped the the timesheets with the former posting a session best time of 1:55.265s.

Iannone’s effort pipped his team-mate by just 0.098s but more importantly the factory Ducati pair, who completed 98 laps between them, were almost 0.3s quicker than reigning world champion Marc Marquez.

Marquez briefly occupied the top spot for Honda earlier in the session, however the Spaniard was unable to match the outright pace of the Ducati riders.

His opposite number Maverick Vinales finished just outside the top 10 in 11th position.

Dani Pedrosa was fifth fastest as he tested new forks on his RC213V, while the Yamaha’s of Jorge Lorenzo and Valentino Rossi ended the day in sixth and eighth respectively having trialled a new gearbox.

LCR Honda rider Cal Crutchlow continued his impressive display from the previous test in Sepang with the Brit separating the Yamahas in seventh.

Team-mate Jack Miller made progress on his Open class machine with the Queenslander less than two seconds adrift of the outright pace in 19th position.