Winterbottom does it again in V8 Race 3

Winterbottom does it again in V8 Race 3 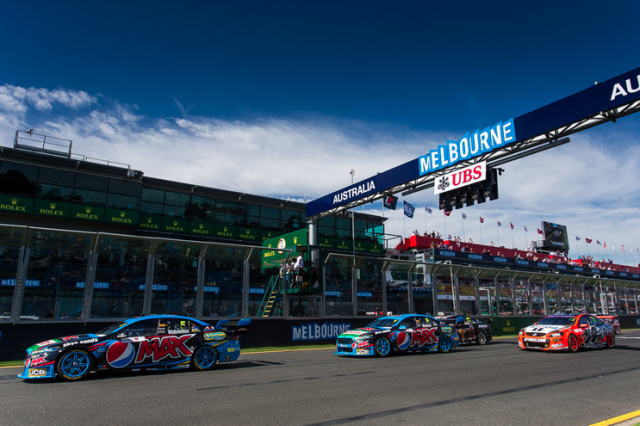 Mark Winterbottom and Prodrive closed on a clean sweep of the V8 Supercars races at Albert Park after taking out today’s third 12 lap heat.

Mostert had to work a little harder on this occasion after Shane van Gisbergen squeezed his Holden into second on the opening corner.

It took the Ford less than two laps to retake the place, cutting down the inside of the Holden at Turn 13 on the second tour.

Mostert then quickly closed down Winterbottom’s two second advantage before sitting comfortably on his tail for the remainder.

“We’ve been trying to work the starts to our favour and when I saw Chaz in third I thought, ‘have I done something wrong with the start?’” Winterbottom said post-race.

“It’s great for the team to have a one-two today. Chaz could’ve got past then if he wasn’t so friendly with his team-mate, but we’re sharing results (data) which is good to see.” 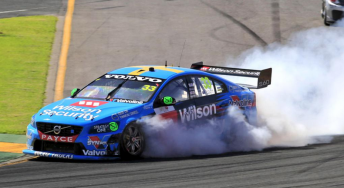 McLaughlin’s Volvo came to grief on the opening lap

Tyre strategy has been the talk of the V8 Supercars paddock during the weekend, with teams forced to spread just three sets across the four races.

While reluctant to give away their plans, differing tyre conditions appeared to contribute to some spirited racing on the opening lap.

Passes again proved few and far between at the front of the pack thereafter, with the top 10 stagnant from lap 3 to the chequered flag.

Further back, Fabian Coulthard dropped from 12th to 17th when an overtake from David Reynolds saw the Holden elbowed wide at Turn 14.

Team-mate Dale Wood failed to finish due to an oil leak, while mechanical troubles saw Scott McLaughlin pull his Volvo off the track on lap 1.

A fourth and final race for the weekend will take place from 1205 tomorrow.

The grid will be determined by the combined points from the opening three races.