McLaughlin penalised for clash with Wood

McLaughlin penalised for clash with Wood 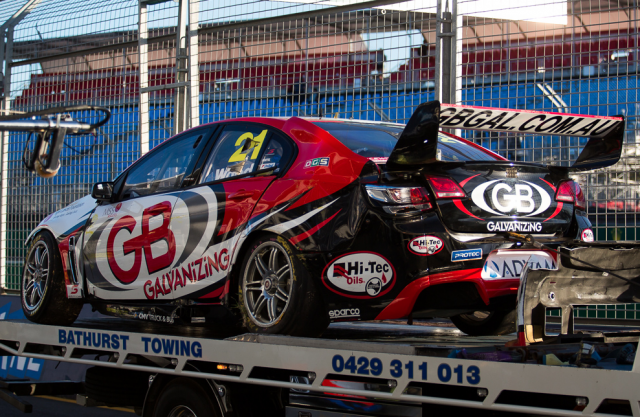 Dale Wood’s Holden after contact with the Turn 7 fence

Scott McLaughlin has received a five-place grid penalty for today’s third V8 Supercars race at Albert Park after an incident with Dale Wood in Race 2.

Wood’s Holden spun into the right-hand fence at Turn 7 after a touch from McLaughlin’s Volvo on the exit of the previous corner.

McLaughlin, who went on to finish 21st in the race, admitted post-race to a charge of careless driving.

The crash was the second for Wood at the same part of the circuit in two years, having been an innocent victim in a multi-car tangle in 2014.

An investigation into late-race contact between eventual eighth and ninth place finishers Fabian Coulthard and Garth Tander found that no breach of the rules occurred.

Erebus Motorsport’s Ash Walsh had earlier received a five-place grid penalty for Race 2 after admitting to careless driving on Marcos Ambrose during the opening heat.

Walsh had moved across on Ambrose at the exit of Turn 5 on the opening lap, with the contact causing both cars to spin.

Tim Blanchard was also involved in the melee which brought out the Safety Car.

Race 3 for the V8 Supercars is scheduled for 1520 local time.