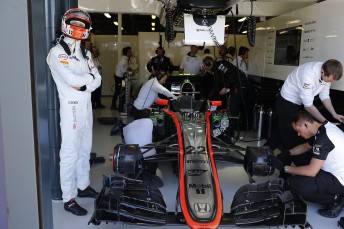 McLaren was forced to run with restricted power in qualifying

McLaren is fighting just to finish the Australian Grand Prix having been forced to run conservative settings on its new Honda engines due to ‘high’ temperatures.

The Woking team endured a difficult qualifying at Albert Park with drivers Jenson Button and Kevin Magnussen filling the back row of the grid for Sunday’s Formula 1 season opener.

The team claims the higher temperatures experienced in Melbourne compared to winter testing in Barcelona has forced an adoption of conservative settings on the new Honda power unit.

“We are trying our best, but I am not satisfied with today,” said Arai.

“In Barcelona I expected a good place for us in Australia, but unfortunately we don’t have the know-how and experience about running in high temperatures.

“We cannot lose the engine in the first race, so our data set is very conservative for the weekend, so that’s the reason why we are down on power with the MGU-K and the engine itself.”

McLaren boss Eric Boullier told reporters that the team is fully aware of the issues and a timeframe for a fix is in motion.

“We have identified the issues. Actually we had much less issues this weekend than we had during the testing, which is the good news,” said Boullier.

“Yes there is a fix in place, and we’re working on our absolute recovery plan, if I may call it like this.

“We don’t want to give a time, we just want to do our best as early as possible.”

Jenson Button says he isn’t surprised by the struggles the team has encountered and believes a finish in Sunday’s race would be a huge boost in overcoming the outfit’s teething problems.

“It was going to be tough and we proved it this weekend but we are all working as one team to get the best of the package,” said Button.

“Hopefully we can get to the end of the race and learn a lot of information.

“We have not done as race distance yet so its a challenge for us to achieve that as it would be for anyone without the experience.

“I think as long as we are thinking on our feet in the race and solve every problem on the way we can achieve a race finish, which you might say isn’t a lot but for us it is a lot to help us progress.”